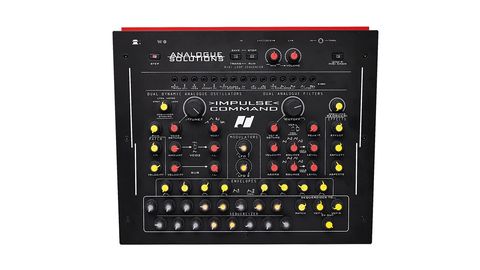 Likely to be an acquired taste, but if you embrace the chaos, this is a truly inspirational instrument.

AS was dedicated to the analogue cause long before its resurgence: it was one of the first big adopters of Eurorack and producers of CV and gate-equipped gear back when that still seemed like an anachronism.

That said, however, the brand has never been ones to simply rehash ‘vintage’ ideas. For all the old-school circuitry, AS instruments has its own personality distinct from retro inspirations. Similarly with its latest, the Impulse Command: while built around a core of classic monosynth elements, its sequencing, modulation and effects tools combine into something genuinely unique.

Impulse Command’s synth engine begins as a straightforward monophonic affair. There are two analogue VCOs, the first with a waveshape selector offering saw, triangle, pulse and noise waves, and a master tuning control. The second oscillator is a pulse VCO with a detune control for adding a thickening effect against VCO 1. A pulse width modulation rotary can apply movement to the waveshape of both oscillators (though only when in square wave mode, in the case of VCO 1), and by default uses the second of Impulse Command’s LFOs as a source. There’s also a square wave sub oscillator that tracks the pitch of VCO 1 at an octave below.

Things first begin to get interesting with the oscillator mixer. Here, VCO 1 has a fixed level and VCO 2 and the sub osc can be set manually using their own rotaries. The level of VCO 2 and the sub can both also be controlled dynamically too though, driven by either velocity or - in the case of VCO 2 - one of the synth’s envelope generators.

The filter section is where Impulse Command really comes into its own. Here we get a pair of low-pass VCFs routed in parallel to the left and right channels (each feeds into its own VCA). Cutoff position is dictated by the left channel filter, which has a large rotary for setting the frequency position. A smaller secondary rotary then controls the offset of the right-hand filter’s cutoff position in relation to its left channel counterpart. A global Peak control sets the resonance for both filters. The filter circuits themselves are CEM design with -24db slopes. Sonically, these tend to thin out a little as resonance is engaged, resulting in bubbling, squeaky sounds as opposed to anything raspy or acid-like. The results suit percussive FX and arp lines more than aggressive basses or leads, but the design suits the stereo nature and general ethos of the synth.

Each of the filters has its own modulation section, which can select between any of the synth’s two envelopes and two LFOs, with a level control for modulation depth. The left-hand VCF has a modulation inverter too, great for applying opposing modulation signals to the two channels. The final filter section control is called Aggro. This applies modulation from VCO 2 to the filter cutoff, for a gritty, distortion-like effect - making up for the slightly lightweight filter resonance.

As alluded to above, Impulse Command has two LFOs and two envelope generators providing its modulation sources. The envelopes are both ADSR, with the second of the two hardwired to both channels’ VCA. The LFO, meanwhile, are simple rise/fall generators, each with just a single rotary controlling the speed. There are a variety of hardwired modulation routings from both the LFOs and EGs - to the filters, PWM modulation, osc 2 level etc - but each also has it own patch points via a small patch bay running along the top of the synth. Here we get outputs from both LFOs, outputs from the two envelopes and an envelope trigger input. There are also inputs for controlling oscillator pitch, pulse width, the cutoff of each filter, plus outputs from each oscillator and I/O for the step sequencer.

The unique personality of Impulse Command is truly unlocked when engaging its two onboard sequencers. These come in the form of a 16-step rotary-controlled analogue step sequencer and MIDI note looper. The latter of these records note data from the MIDI input and can capture up to 16 notes, which are then looped. A transpose function allows patterns to be shifted up and down according to incoming MIDI signals, which can be handy for turning simple riffs into longer progressions. There’s no way to input rests into the MIDI looper, so as standard it will play all notes back in a straight, regular rhythm. There are ways around this though - Impulse Command allows users to advance the sequencer via incoming MIDI notes so you could, for example, use an external MIDI sequencer to trigger a more irregular rhythm.

The step sequencer, on the other hand, is primarily used for modulation, although it is possible to patch it into VCO pitch via the patch bay. Each sequencer step gets its own bi-directional rotary for adjusting modulation depth. A front panel control dictates the clock source for both sequencers, selectable between LFO 2, MIDI or an analogue clock input. Both sequencers can also use the Reorder! control. This shuffles the order and direction of the sequences running from both the step seq and MIDI looper, letting users fl ip between a selection of preset patterns that are great for inspiring new ideas.

The step sequencer has four routing rotaries for directing its modulation signals - VCF L, VCF R, CV out and patch. The first three of these are fairly self explanatory, wired to the cutoff frequency of each filter and the CV output of the patchbay. Patch is a little more mysterious. Essentially, under the hood, Impulse Command has a selection of internal modulation routings, the configuration of which are set up as eight different ‘Patches’. These Patches can be configured in three ways - manually via a front panel control, via MIDI velocity, via the step sequencer or by all three of these methods at once (it’s also possible to remove these internal Patches by setting all of these controls to zero).

The only non-analogue element of Impulse Command’s design is its master effect processor, with its range of eight effect types, which generally lean towards spatial and ambient effects. There are four delays - including ping-pong and long decay varieties - plus two reverbs, a flanger and a bitcrush effect. Each can be tailored by the two Aspect rotaries and dialed in via a wet/dry control in the master section.

Three of the effects also have a third adjustable parameter, controlled via the step sequencer. This allows for the level of reverb or delay to be sequenced or, in the case of the bitcrush effect, to modulate the bit rate of the right channel using the sequencer.

These effects sound great in general, and suit the overall sound and workflow of the synth well, adding to its appeal for weird FX and out-there percussion. There’s an audio input too, allowing external signals to be routed through the stereo filters and master effects.

If the description of these patches sounds a little vague, that’s intentional - designer Tom Carpenter purposely withholds information on what’s going on under the hood, to allow users to “to discover new sounds and not get bogged down with the details.” While it’s easy to get bogged down in trying to work out exactly what’s going on with these patches (a lot of filter and VCO 2 modulation, basically), it’s far more fun to just follow this advice.

This sums up the ethos of Impulse Command. It is, of course, possible to build a monosynth sound as you would with any standard subtractive synth. However, you’ll get far better results out of this instrument by throwing multiple modulation sources its way, experimenting with sequencer reordering and tweaking. Fortunately, for all its unpredictability, Impulse Command is a highly rewarding instrument. Its sound is thick with plenty of weight, and the snappy envelopes and stereo filters combine to create fantastic percussion and effects sounds. Its closest comparison on the market right now is probably Moog’s DFAM, in that both instruments excel at sounds that walk a fine line between percussion, bass and FX, although Impulse Command certainly has its own character, feeling a bit like a compact Eurorack setup in a desktop box.

This kind of workflow won’t suit everyone - sequences lean towards techno, ambient or electronica - and it isn’t cheap either. Those seeking a single, all-rounder analogue synth could get more sonic variety, and polyphony, for their money elsewhere. What you do get, however, is a characterful, inspirational and downright fun instrument, which rewards exploration. Within an hour, we’d created a folder’s worth of weird, groovy synth loops - which is a real thumbs-up in our book.