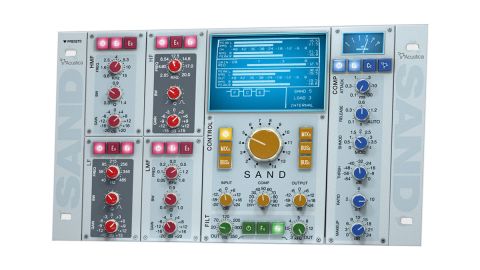 It demands a powerful host computer and suffers from the usual convolution plugin response issues, but if you’re a fan of that SSL sound, you have to check Sand out.

Acustica Audio is on something of a roll right now with its rapidly expanding Acqua range of convolution plugins, delivering sample-based emulations of all manner of classic and high-end hardware effects units.

The latest, Sand, is a departure from the usual formula, sampling the preamps, EQ, filters and compressors of the SSL 4000 G+ and 5000 series consoles into 1GB of impulse responses, and rolling them all into a unified channel strip plugin. It comes as the headline act in the Sand Fab4 bundle, which also includes individual plugin versions of each module: the Sand EQU4 EQ, Sand Bus4 compressor and Sand Pre4 preamp. We’re reviewing the full strip here, but there are no surprises with the separate plugins - they’re identical to their ganged counterparts.

The EQ is a four-band model, and each band can be switched to either of the two sampled SSLs - A (4000) and B (5000) modes. In A mode, the Low and High bands are shelves, and the Low Mid and High Mid bands are bells with adjustable Q. In B mode, the two Mid bands are also variable-Q bells, but the High and Low bands sweep smoothly from shelving to bell-shaped as the Q knob is turned clockwise. The 21 fixed frequencies of each band differ between A and B modes.

Sand’s low- and high-pass filters occupy their own processing block, rather than being part of the EQ section, enabling them to be positioned independently in the signal flow. Again, both SSLs have been sampled to create two modes, A (4000) rolling both filters off at 12dB/octave and B (5000) upping the high-pass to 18dB/octave. In terms of range, the high-pass sweeps from 16-350Hz and the low-pass covers 3-22kHz.

The Compressor also features two modes: mode A is the SSL 4000, while mode C is a customised alternative with an attack speed more comparable to “some other familiar software compressors”. Further behavioural tweaking is on offer with the Shape Modulation (SHMOD) knob, which sweeps the attack response curve from exponential to logarithmic - very useful indeed. There’s also an ‘Insane’ mode, which raises the oversampling for greater accuracy at the expense of CPU cycles.

The knob below the display switches between 14 preset signal flows - a weird workflow, but one that works. The sidechain - which can be fed an external signal as well as the internal one - is also factored into each configuration, and the 14 setups cover a comprehensive array of serial and parallel routings.

Also in the Control section, the six buttons around the routing knob switch the mic preamp emulation between Mix (sampled directly from the console channel strips) and Bus types, with two Mix modes and three Bus modes: A mode (4000) is the most transparent, while B mode (5000) has a warmer, more excitable sound, and C mode (Bus only) is the preamp of the 5000 Quad Bus Compressor with its characteristic saturation.

Finally, the Comp knob in between the Input and Output gain controls sets the wet/dry balance of the compressor output for parallel compression.

Sand is another impressive achievement by Acustica, bringing the sound and character of its sampled source hardware to the DAW in real style. The EQ is tight but musical, while the compressor absolutely nails the transparent ‘gluing’ for which the SSL is known. The preamps are less profound in their impact, but certainly make a difference when it comes to processing vocals in particular.

As with all of Acustica’s convolution-based plugins, the price you pay for such exceptional quality is a horribly laggy GUI (in terms of the time it takes for moving a control to have any audible effect, and the low-framerate metering) and very high CPU usage.

One annoyance that can’t be blamed on the computational demands made by the core technology, however, is the detented knobs (compressor Ratio, Attack and Release, Control routing, etc) twisting smoothly then snapping to the nearest value when released, rather than just stepping between values. Ultimately, Sand and its component modules can be a pain to use, but, man, they sound incredible.