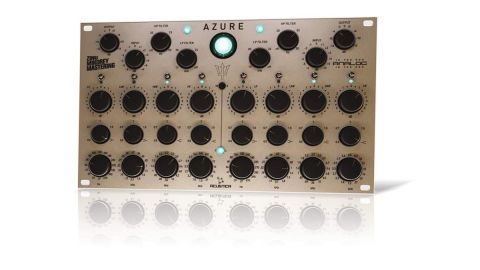 Although the transformers and “signal-path characteristics” of the original hardware have been faithfully captured, apparently, the EQ band summing topology has been changed from parallel to serial. Whether this is totally intentional or down to a technical limitation, we’re not sure.

Installing through Acustica’s simple-but-effective new account-tied Aquarius application, Azure comes in four versions: regular and HQ (High Quality), each with a ZL (Zero-Latency) option. While the regular Azure draws on a 670MB bank of impulse responses (sampled by top Nebula library developers Analog In The Box), the HQ versions more than double that to 1.5GB. You’ll need a very hefty machine to run the latter, though - they were essentially unusable on our 2016 MacBook Pro (i7 3.3GHz, 16GB RAM).

A bit on the side

Azure is a four-band stereo EQ, switchable between left/right and mid/side routing, with independent but linkable controls for the L/M and R/S channels. Each band (Low, Low Mid, High Mid and High) offers 16 stepped filter frequencies, from 27Hz to 27kHz, all told, and up to 7dB of cut or boost; while the Q controls step through four bell shapes and shelving.

High- and low-pass filters are on-hand for rolling off extremes (25/33/50Hz and 17/20/24kHz, respectively), and hitting the big, unmarked blue button at the top-centre switches in the preamp, which colourfully saturates the signal in convincingly ‘analogue’ style.

Sadly, we don’t have the hardware that informs Azure to hand, so direct comparison is impossible, but purely on its own terms, this is a truly beautiful EQ, whether used to intricately rebalance the whole frequency spectrum or just apply a gentle top-end lift. Having overlapping frequency ranges and a shelving option on every band ups the sculpting potential, and the well-judged Q widths and frequencies make it very easy to use. While transparency is a key feature, the preamp adds a touch of character; and the mid/side mode is incredibly effective for enhancing left/right and front-to-back imaging.

Acustica Audio has always made great claims with regard to the Core technology at the heart of its Acqua plugins, which handles all the subsystems of the convolution process, from sample management to real-time processing. Core is constantly in development, and Azure is packing the latest version, Core 12. This, it says, upgrades SASM (Symmetric & Asymmetric Saturation Modelling), introduces the new STT (Super Transient Technology) post-production sample de-noising system for cleaner deconvolution, and deploys a new “highly efficient” algorithm for further de-noising. OK, we have to be honest and say that we’ve never noticed any differences between any versions of Core in actual usage, and v12 is no exception. This being under-the-hood stuff, though, we wouldn’t really expect to, and ultimately, it’s good to know that Acustica is always striving to improve their engine at the microscopic level.

The usual Acustica workflow caveat applies, of course: Azure is slow to respond to adjustment of its knobs and switches. It’s just an inevitable consequence of the technology involved, alas, but at least in this case, being a mastering-orientated processor, supreme sound quality trumps the need for fast real-time tweaking. Acustica’s continuous-but-snapping knobs for selection of discrete stepped parameter values (they move continuously, but snap to the nearest fixed value when released) can also be annoying at times. For a company that prides itself on ever-advancing technologies, we hope this straightforward GUI issue will be addressed soon.

Those ongoing issues aside, Azure is a stunning mastering EQ that performs genuine magic in terms of natural-sounding frequency adjustment and stereo manipulation.