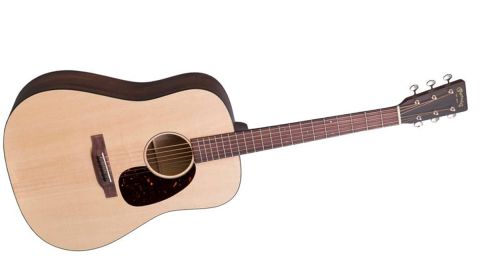 This D-15 Special is well named. A classic old-school-style voice that will no doubt mature into quite a serious dread.

If you're looking for a quality, all-solid wood dread from the company that created the beast 100 years ago, this model deserves your attention.

The new D-15 Special is part of a trio of late summer releases - including the DR Centennial and a 000-15 Special. We have the acoustic version; the electro costs £1,635.

As reflected in the price, our D-15 Special is made at Martin's Nazareth HQ. Our full-size Special, in Martin's 15 Series, should be all-mahogany but it isn't: the 'Special' bit on this, and the 000-15 Special, is the Sitka spruce (not mahogany) top.

The D-15 Special's sprayed lacquer matt finish gives the same utilitarian vibe as the standard 15 Series, but with its clean Sitka top and just a single black edge binding (top only), it has quite a modernistic appearance contrasted with the abalone 'Golden Era'-style diamonds and squares on the rosewood 'board with matching rosewood bridge. Top bracing is non-scalloped, the neck profile is the 'modified low oval' with standard taper, while the tuners are open-backed Grovers. The D-15 Special features bone and generic die-cast tuners.

The D-15 Special is very similar in feel to the recently-released DR Centennial and not a million miles away in sound, either: a little 'smaller', slightly less powerful and a little sweeter in the high-end. There's more difference between the Taylor 410e-R and the DR Centennial than there is between this Special and the Centennial. We don't hear a vastly different range of tones, either.

The D-15 is a little more subdued, but not in a bad way - plenty of players would be more than happy here and will have a noticeable saving in terms of cash outlay. With playing time under its belt, we'd expect some maturing, and our older reference DC-16GTE, which sounds a little wider with less mid-range clout, gives some indication of what to expect.