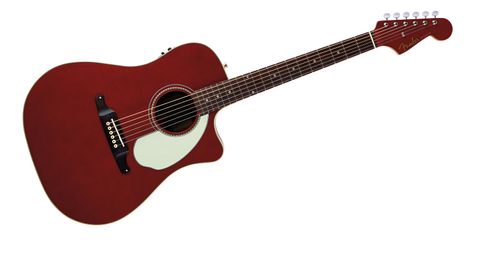 A good sounding, great looking, top value for money acoustic: are you ready to be noticed?

Acoustic guitars have appeared from Fender's Asia-based factories in every decade since it cut the strings on its original, American-built acoustic instruments in 1971. Now, from China, we have the distinctive Candy Apple Red Sonoran SCE...

Fender calls the Sonoran a 'tight' dreadnought, meaning that it has a slightly tighter waist and marginally smaller dimensions all over than Martin's dreadnought blueprint, though it is nearly five inches deep at the endpin.

There's a solid spruce top supported by scalloped X bracing and the guitar displays the kind of modern precision manufacturing that is such a far cry from what we had to deal with on lower-end acoustics of yore: pretty impressive all around.

It's a nice surprise to find a proper bone nut and saddle installed and the Sonoran's neck, with a full 643mm scale, is just under an inch longer than a Stratocaster from endpin to headstock tip. It's also set up to play very well straight out of the box: stable tuning, easy actions - exactly the kind of experience that will encourage you to play more.

There are factory-fitted strap buttons so you can stand confidently on stage, plugged in via the Fishman Isys III electronics package. This comprises an under-saddle Sonicore pickup with a smart, modern-looking preamp housed in the guitar's upper bout.

Again, it's such a far cry from what you could have expected 20 years ago; a decent on-board preamp and tuner with LED readout would have seemed like fantasy back then.

Finished with tidy binding, an attractive checker rosette and quirky-shaped pickguard, this surpasses cheapo-box status by a massive margin; in fact during its time with us, it was hard to liberate from anyone who picked it up. As any politician will tell you: likability goes a very long way.

The neck is maple and with a comfortable C profile and medium nut width (measured 43.2mm for the Sonoran) and feels instantly familiar to anyone au fait with a Stratocaster, for example, not least because of that unmistakable six-on-a-side Strat headstock.

If you've played your share of Fender electrics, you'll find yourself tempted into more electric-like phrases; it's entirely in your head, but the maple definitely makes us think more 'electric' when playing.

There's a reasonable radius to the rosewood fingerboard - measured at something close to 12 inches - enhancing the electric-friendly feel and as we said earlier, the inviting setup and easy action provide no barriers for fun.

The Sonoran sounds surprisingly big and grown-up, given its fun appearance, with a good dollop of dreadnought bass and sparkly highs that pushes the midrange back slightly; it's a satisfying strummer and a reasonable picker played purely acoustically.

We think the maple neck adds its own sonic stamp to proceedings as well; it's subtle but the midrange focus is different from a lot of solid spruce-topped, mahogany necked mid-price electros... and boy are there a lot of them.

Plugged in, the Fishman Isys III returns a dependable under-saddle piezo-type tone; a good strong output and enough on board EQ to boost or cut bass, middle and treble frequencies; we'd be more than happy using this on gigs and open mics.

We're not aware of a rule book that states that acoustic guitars must be wood-coloured, but outside of the odd sunburst and black, the vast majority certainly seem to be varying shades of brown.

Right from the off, then, this fun-packed Fender offers something different from the norm and that may be enough to win it friends. That it's an easy player with satisfying sounds and capable electro-acoustic abilities to boot adds up to an easy buying choice if you're taken with the looks.