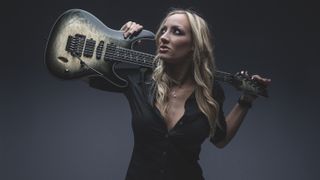 Could you be the best young guitar player on the planet? If you’re under 16 and love to shred, the Young Guitarist of the Year 2019 competition - powered by Ernie Ball - is for you. What's more, we’ve signed up a crew of star judges to help us select the talent.

Submit a video of your playing using the form below and your entry could be shortlisted and judged by some of the biggest names in guitar, including Nita Strauss, Rabea Massaad and Plini.

If you’re selected as one of three finalists you will battle it out for the title and a brace of huge guitar prizes at the UK Guitar Show in London. Last year’s winner Hunter Hallberg is already seeing an upswing in his playing career. Could you be next?

If you’re considering entering but need an extra push to submit your video, here are some sage words from Alice Cooper guitarist, solo shredder and Young Guitarist of the Year judge Nita Strauss. Nita also shares an update as she gears up for a busy summer on the road.

What qualities will you be looking for from Young Guitarist of the Year entries?
“Number one is definitely going to be creativity! Technique and chops are important but I feel like the standouts for me will be the ones doing something out of the ordinary with their solos.”

What tips can you offer players looking to enter?
“Relax, show us your best and, more importantly, have fun!”

How important is sound and video quality compared to a good performance, creativity and originality?
“It’s important that we can see and hear what you’re playing clearly - beyond that, it doesn’t matter at all!”

What advice do you have for guitarists who might be nervous or reluctant to put their playing out in the public domain?
“The most important thing is to relax and trust your playing. As long as you’ve put the practice time in, there’s no reason to be nervous! Trust yourself and your instincts.”

Tell us about the guitar projects you have coming up that you're most excited about?
“At the moment my biggest project has been creating a great live show for fans coming to see my solo music played on tour. It’s one thing to make a great album but it’s another to make it translate to a concert experience, so that’s been my biggest focus. I’m also working up something pretty cool for the upcoming Alice Cooper tour.”

Tell us what fans can expect to see and hear on your solo tour?
“We’re playing Controlled Chaos almost in its entirety, which is so cool because the album is like my baby - it’s hard to choose between songs. We also throw in a little Iron Maiden and Alice just for fun!”

You released Controlled Chaos last year. How have those tracks been going down live?
“The reaction has been incredible. It’s awesome to hear the crowd singing along to songs that have no words.”

What is your go-to guitar rig for your solo shows?
“I keep it super simple for the solo shows - I have to be able to carry everything I need on a plane! So I bring two guitars, a Shure GLX-D Wireless and a Boss GT-1000, and run that direct into the PA.”

You also released your signature Ibanez in 2018. What has the response to that guitar been and do you have plans for other signature products in the pipeline?
“It’s been an amazing response! It’s the coolest feeling to not only get to play my dream guitar, but to bring it to production and see guitarists around the world playing it. We definitely have some fun things in the works for 2020.”

What does playing guitar mean to you?
“It means everything! It’s the best and most pure way that I know how to communicate and express myself.”

8 tips for Young Guitarist of the Year success