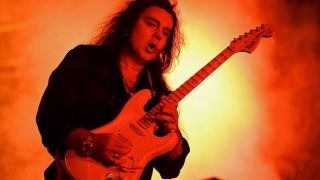 Yngwie Malmsteen, the guitar virtuoso's virtuoso, is coming to London this summer for a one-off, exclusive UK show.

Malmsteen brings his World On Fire 2017 Tour to the O2 Forum Kentish Town on 2 August.

The show, which is presented by Old Empire, Tidal Concerts and Triffid Productions, presents a rare chance to see the Swedish shred master on these shores. Tickets start from £45 and you can snap them up here.

Malmsteen is a near ever-present in lists proclaiming the greatest guitarists of all time, and it’s easy to see why. Seemingly influenced every bit as much by Bach, Vivaldi and Mozart as rock heroes like Hendrix, Yngwie’s introduction of neoclassical elements into the rock landscape of the 80s was as revolutionary as it was mind blowing.

After coming to prominence as a terrifyingly-talented teenager, Yngwie went on to amass plaudits by the bucketload; firstly thanks to his work with Steeler and Alcatrazz and then through his stellar solo work.

The latter saw the guitarist put out a slew of trailblazing albums, such as his 1984 debut Rising Force and 1988 UK hit Odyssey. He helped to put neoclassical metal on the map and in doing so influenced players all over the world, with John Petrucci and John 5 just a couple of high-profile names to have tipped their hat to Yngwie over the years.

And what’s more, the chance to see Yngwie’s jaw-dropping skills in the UK have been frustratingly rare in recent times, in fact when he takes to the stage at the Kentish Town Forum on 2 August it will have been almost five years since his last show in the capital. Which is, of course, all the more reason to make sure that you don’t miss out.

Doors open on the night at 7PM, with Sheffield rockers Immension providing support.