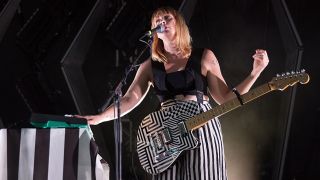 Jenn Wasner, frontwoman of the ever-evolving indie rock duo Wye Oak, has a ‘question everything’ approach to music-making.

As guitarists we can often be victims of our own assumptions. The vintage amp sounds best. You play a Fender or a Gibson. You tune  in standard or - if you’re feeling especially fruity - a half-step down. You hit the Tube Screamer for solos. You want to make it? You live in a city and hang out in a scene. No wonder some consider guitar music ‘stale’.

Wasner thinks differently about the creative process. “I think to reduce something down is almost a kind of death,” she tells us. “There are an infinite number of ways that an idea could expand. Once that gets into your brain it’s hard to want to limit yourself to any one specific thing.”

With Wye Oak’s new album The Louder I Call, The Faster It Runs just landed, Wasner waxes lyrical on inspiration, tunings, recording and how to live life as a musician in the 21st century.

Andy [Stack] wrote and supplied drums first for this record, which is something of a reversal of the usual process. What was the benefit of that way of working?

“I always say that no matter how many songs you’ve written, no matter how many times you’ve had creative good luck and success, there’s no guarantees. It doesn’t get easier to get back to that space. [But when you do] it snaps into focus in a way that feels really weird and magical and you just try to pounce on that as fast as you can. It’s not something that you can force or predict.

“The only thing that I’ve found that gets you there faster is being more open-minded about the sources that can bring you there. It’s kind of like a drug: you always need a little bit more, or a little bit different, or a little bit better, to get back to that same place… So with this record it was cool to invert the process and be like, ‘Okay, I have this drum take. What can I make out of this?’

“It’s just distracting your conscious brain enough that you’re able to loosen up and let inspiration find you. It’s like a magic eye: if you try to focus your eye, you lose the picture. It’s all little brain tricks that you use to get yourself back to that space where creation happens.”

So that’s the headspace. What’s your physical workspace like?

“Right now, I have a three-bedroom house and one of the bedrooms is a mini studio, so I’ve got my drum kit, a whole array of synths… On this record, it was mainly my [Roland] Juno-6, and I was using my friend Nick’s Prophet 6 a ton. I have a whole host of drum machines, pedals, etc.

“Then my amps, bass guitar, guitars and I use a Universal Audio Apollo 8 channel interface. I have a couple of decent microphone options: the one that I use for vocals most often is a Mojave 201, a small boutique tube condenser kind of mic, then I have an AKG 414 that I pretty much use for anything else. It’s really nice to have something that’s so versatile and that I can use for everything.

“Amps-wise, I have a Vox AC15, but I use a Fender Twin when we play live, just because it’s a little bit more of a workhorse. It’s bigger, sturdier and it’s one of the only amps that I’ve never managed to blow up at some point. I like the AC15 a lot for the relative tone quality to size. You can get nice, crunchy, tube-y tones out of it at a relatively low volume, whereas you know the Twin is going to be loud as fuck and pretty much clean, which is great for live because it’s a blank slate.”

You have a long-established relationship with Reverend, resulting in your signature model. What do you use most?

“Reverend have been such an incredibly generous and amazing company to work with. I love their guitars, so I have a bunch of them. I have a few different guitars, because when we play live my propensity for alternate tunings makes it very difficult to play a full set seamlessly, so I tend to bring a lot of guitars with me. It’s not just for senseless excess! Before I got the Reverend signature, I was playing either a Charger or a Jetstream, two of their other models.

“One of my favourite guitars that I have was a gift from a friend, years ago - it’s a Harmony Rocket, a semi-hollow-bodied guitar from the '50s that is just gorgeous. The song You Of All People has sort of a distinctly different vibe to it and that was something I wrote on the Harmony as opposed to one of the Reverends.”

Alternate tunings seem to play a big part in your approach to guitar playing. How many are you using?

“Oh. My. Good. Lord… I could not begin to tell you! If I took a guess… fuck… [laughs] probably at least 30. When I’m writing, I pretty much just start adjusting strings by ear just to get it to sound how I want it to sound. I really like using resonant strings, similar to a sitar or a banjo [player], where you’re kind of playing more lead-y parts on certain strings and other strings are just tuned to jangle open and give everything you play this sense of coherence and resonant drone to it. So, obviously, the tunings vary widely.

“I think the thing that attracted me to guitar in the first place was that you’re not going to go into a piano and start changing the strings around, but with a guitar you can make it into anything you want. It’s endlessly variable.

“If I can make it easier for me to play and more interesting-sounding then I’m going to do it. I still love that. I still feel like, although it gets to be more and more of a pain in the ass, it is one of those tactics that gets you into a new creative headspace. So I’m going to keep doing it, and eventually the amount of tunings I need is going to increase until I have to hire someone to deal with it.”

Your recent single Lifer, in particular, has some really interesting parts that we wanted to ask you about. One is the opening sound, that sort of chiming, deep guitar… How did you get that tone?

“There’s a few things going on there. One is the DSI Prophet, which had two different versions of that patch: a sort of thinner one and a thicker one with a little bit more substance in the low-end in the verse and bridge parts where there was a little more impact needed.

“Then, when we were in the studio, I had this idea to tune the guitar open and then I took a clave, like a piece of wood, and I just hit the back of the neck of the guitar in time with the synth. It layered on another set of the same notes in the patch, but just sort of this percussive yet resonant attack. That’s the whole spectrum of what that part is made out of.”

Lifer also has a really cool, lilting guitar solo that’s quite unusual. How did you go about creating that?

“Well, I knew I wanted it to be sloppy and ragged, but it can be hard to let yourself do that. I knew I wanted the imperfections to be present because a classic ‘guitar solo’ like that can so easily get so cheesy. So, I’m not going to lie, I was a little high when I did it! [Laughs]

“I’m not very good at instruments when I do any amount of drugs - I just lose my ability - so I just wanted to take the edge off and make sure it was a little rough around the edges. The sound I got from my new favourite thing, which is this distortion pedal made by Moog, the MF Drive. It’s got a tone control and a filter, so you can EQ it and get these really fuzzy, but very trebly - super-harsh and intense - tones out of it. I’m using that a lot in our live shows now.”

You relocated from Baltimore, Maryland to Durham, North Carolina in 2015. Was there a creative motivation for that?

“Yes, in North Carolina I have a three bedroom house to myself. I have a whole room that is just my music stuff, a guest room, it’s in the woods, it’s beautiful - I love it. I couldn’t live like this in any other major city in America - I just don’t make enough money. But the amount of time and space that I need to make the work that I want to do just required a lot of focus and a lot of solitude and the best and easiest way to get that is to create your life around it. I was always living with people in Baltimore and figuring out ways to be creative, but it was much harder. You had to work around people.

“I guess it’s all about priorities. I think, as an artist, it makes sense to live as cheaply as you can… I understand the appeal of living in a place like New York, and if your priorities are to go out and be seen and be part of a crew, then yeah, I get that, but most people I know who live in places like that find it really difficult to find the time and space to create.

“I’m addicted to the creative process. I need it to feel productive and happy in my life. I don’t care as much about going out and being at shows. I’m very content to just do my work, hang out with the people I’m close to and, you know, I get plenty of that other shit on tour.”

We recently spoke to John Carter Cash, who runs the Cash Cabin Studios. He said Johnny Cash initially built this cabin in the woods of his Tennessee estate as a post-tour bolt-hole, because he needed somewhere quiet to decompress. This feels similar…

“I think it’s all about input versus output. Creative people need the input. You need to go out in the world and talk to people and have experiences, but the output is just as important and that is a very solitary process. It’s not something that you get a lot of encouragement or attention for.

“It’s a very personal choice and it’s something that you do alone and it’s a choice that you make to move away from other things that could be happening - the potential for input - and take time to process.

“One without the other is useless, so it’s all about trying to strike that balance. For a while, I had a lot of input, but I didn’t really have a lot of time and space for the output. My life is more balanced now.”