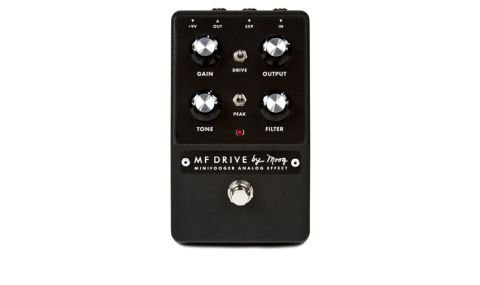 An overdrive distortion pedal with huge variability and a unique dirty wah if you 'play' the filter with an expression pedal.

Moog, long known for its iconic synthesisers, but also more recently for its Moogerfooger series of pedals (large, feature-packed with lots of knobs and control options, and expensive) has now come up with something a more affordable, pedalboard-friendly Minifooger range, including this Drive pedal.

The new series comprises five pedals with standard 9V battery or adaptor power, true bypass and the facility to plug in an expression pedal (which we also look at here) for real- time parameter adjustment.

The MF Drive employs a Moog Ladder Filter, FET amplifiers, and classic OTAs to create its dirt. You have a choice of two levels of range for the gain, to match the pedal's input to what's plugged into it.

A gain knob dials in the amount of dirt, delivering a wide range of sounds, from overdriven amp through to fuzz tone, while an output knob offers enough extra clout to use the pedal as a booster.

The actual tone of the distortion is dialled in with interaction between the filter and tone knobs. There's loads of bottom-end here - guitarists will not find much that's useful on the lower settings of the filter, but they're just right for bolstering a bass.

For guitar, there's plenty of tonal variation, particularly in the upper mids and top, which can be accentuated with the peak switch, which adds a +15dB boost at the filter cut-off.