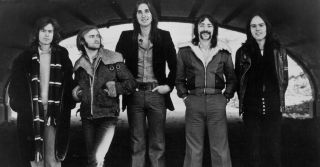 Genesis are reuniting for UK shows in November and beyond, but it's as the trio lineup of Phil Collins, guitarist Mike Rutherford and keyboardist Tony Banks where they found the most commercial success. Fans of their early progressive era with Peter Gabriel on vocals and Steve Hackett on guitarist are still out of luck, and in a new interview with Mojo (via The List), the three reunited members have explained why that will continue to be the case.

"I think a reunion with Steve and Pete would be uphill," said Collins when asked about a comeback from the '70-'75 era five-piece lineup. "Playing with Mike and Tony is the easy option."

Rutherford added: "I know people love the idea that the five of us will get together again, but the songs most people know and love are from the last 40 years. Peter left so long ago. I really don't know what we could do with him now."

Well, we'd imagine playing songs from the six albums the band recorded with Gabriel would be a start?

But it's not to be, and Banks agrees.

"As much as I love those early albums, it would be weird to just do songs from that period," he admitted.

The band also weighed in on the inclusion of Collins' eighteen-year-old son Nicholas on drums for the forthcoming reunion dates.

"I didn't elbow him into the band," reassures the singer, "you can't force a drummer onto these guys."

Phil insisted: "I didn't elbow him into the band. You can't force a drummer onto these guys."

Banks also revealed he had initial reservations about the teenager's inclusion, unti he saw him play.

"When I first heard Phil was using Nic, I thought it was a stupid thing to do," said Banks. "Nic was only 16. But then reports started coming back about how good he was, the real deal.

"I saw Phil's show at the Albert Hall and Nic was just incredible," he added.

The band also revealed that the first songs they played for their first reunion rehearsal were No Son of Mine and Land of Confusion.

"Mainly because they're the two easiest," admitted Banks. "Nic knew them better than we did. He showed us up – embarrassingly so."

And while they're busy preparing for the tour, there's no new album in their sights.

"It's not on our radar, no," stated Rutherford. "This tour is a big undertaking in itself."

Genesis are currently streaming a different concert film from their trio era every week as part of their own lockdown film festival.