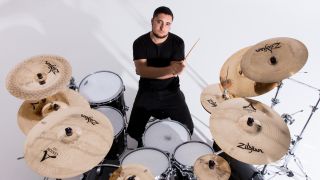 “Metal drumming can tend to get repetitive.” Trivium’s Alex Bent tells us. “So I try to make a point of switching it up and adding in different flavors from other styles of music. I love listening to funk, latin, and gospel music and I take a lot of inspiration from there.”

It’s a statement that some might be surprised to see coming from a drummer whose career has seen him covering metal and its sub-genres in detail, from death, technical and symphonic metal, and even a stint standing-in one of his idols, Gene Hoglan with thrash titans, Testament.

But it's also one that makes total sense when you hear Alex play, constructing parts that go way beyond metal standards, incorporating influences as wide as the list of albums he's selected.

His second album with Trivium - What The Dead Men Say - was released in April, and having had time to become settled within the band, we asked Alex what the process was like - especially given that he lives in California while his bandmates are based in Florida.

“They will typically write demos from home and send them back and forth between band members. They are just riffs, ideas, and concepts. Once we get a good amount of things to work on, I fly out to Florida so we can all get together in our rehearsal space and work those ideas out.

Making the two albums were mostly different processes. We used the same producer, but I got to be more involved in the writing process this time. When I joined the band, they had already been working on demos for The Sin and The Sentence, so I basically just came in and added in some of my elements to the mix."

"When we recorded The Sin and The Sentence, we recorded drums first. On What The Dead Men Say, we did the opposite and recorded drums last. It was nice for me because I was able to record to actual mixes rather than scratch tracks. It made it easier for our producer, Josh Wilbur, because if there was anything we wanted to change, it was very simple to go back and do that."

Rolling up to Foo Fighters’ Studio 606, Alex tracked his drums under the watchful eye (and golden ears) of Josh Wilbur, known for his hard-hitting, aggressive drum sounds.

“It was an all-around incredible experience. Many of the people who work there have been with the band for many years. It was like a total family vibe. It's really inspiring to be in a location like that, where every turn you make, there's tons of awards and cool music memorabilia. The energy was great not only between staff, but with the other band members and our producer as well. We have great natural chemistry so it's very fun!”

“Josh is a wizard when it comes to drums and his ear is out of this world. He was the reason why I ultimately started using the Mapex Black Panther Sledgehammer snare. It has that fat sound and tons of attack that we love and I always get compliments on it.

On What The Dead Men Say, he suggested we use a Gretsch Bell Brass snare this time, and I absolutely fell in love with it. He is really good with tones and I'm always impressed to see the ideas he comes up with for recording.”

Of course, we’re asking Alex about the albums that influenced his drumming style, but before we do, we couldn’t resist asking him about his incredibly powerful bass drum speed and endurance.

“I have a lot of drum students, and the main thing that I always try to get across to them is to work on endurance and consistency. Speed will come along the way. I have a leg exercise routine that consists of a 10 minute workout that has really helped me build up my speed, while also strengthening my weaker limbs.

For pedals, I have been using the AXIS A-Longboards since I was 15 years old. I try to keep my tension right in the middle, not too tight or too loose. I play heel up and sit fairly low with my legs at a 90 degree angle.”

Clearly, Alex has been a student of metal, but as his selection of albums show, also a student of drumming in all forms. Here are the albums that shaped his overall approach behind the kit.

“This is the album that I've listened to religiously since I discovered metal. To this day, when I need some type of inspiration, I throw this album on and really try to absorb the playing on the drums. It is an absolutely phenomenal album!”

“I got into this album because it was another of Nicholas Barker's projects. If I had to pick a favourite, it's a toss up between this record and the Dimmu Borgir record. I discovered this album a long time ago, but when I was writing the DragonLord album with Eric Peterson, he reintroduced me to it.”

"When I was younger, I went to see Killswitch Engage. All That Remains was also on the tour, and drumming for them at the time was Tim Yeung. I met Tim after the show and ended up following his career/bands because I was fascinated by his playing.

Long story short, I discovered Decrepit Birth when I was in computer class in 7th grade. I was looking through his discography and came across this album. I was completely blown away. This is the album that opened the door to brutal/technical death metal for me. It was only a bonus that I ended up being able to fill in for Decrepit Birth several years later. Talk about coming full circle!"

"This was another album that I had been dissecting before I recorded The Sin and The Sentence. I wasn't really into Rush growing up, but the older I get, the more I appreciate them and Neil Peart. I really dug into his playing because I wanted to listen to the things that were influencing my influences. Neil was truly a legend. Rest in peace!"

"Since I started playing, I've always had a fascination with jazz drummers. This album is one that I've been trying to tear apart as long as I can remember. It still challenges me, even just sitting down and listening to it. I still have a ton more studying to do when it comes to his music!"

"Dave Weckl is another one of my favorite fusion artists. His DVD was the first drumming DVD I ever owned. I still listen to him on a regular basis. His playing really elevated the jazz/funk fusion style of drumming!"

"Slipknot was one of my favourite bands growing up. To be able to tour/play festivals with them all the time is such a treat for me. The energy from the Iowa album is truly unmatched, especially when you see those songs played live. Joey Jordison had a huge influence on me and he was a huge bridge to me discovering other metal drummers."

"I used to play a lot of video games when I was younger (I'm slowly making my return back to that world), and I was playing Grand Theft Auto: Vice City. One of my favourite features about the GTA games is the radio station. I was flicking through the stations and I came across the song Raining Blood by Slayer. At this point, I was still very young, and hadn't been exposed to a lot of metal music yet. I couldn't believe the double bass!"

“Not many people know this, but I am half Puerto Rican and I absolutely love latin drumming. This album was one of the firsts that I discovered when I started listening to salsa music.

I would sit on YouTube for hours seeking out latin music so I could hear the drumming. El Gran Combo really stood out to me. I would encourage all drummers and percussionists to check out records like this.

The drumming is mind-blowing. I love to throw Latin chops and phrasing into the music. I was really able to highlight this in the song Sickness Unto You on our new album WTDMS. There is a section where I play a songo beat. I get asked about it constantly and it makes me proud to be able to represent my roots.”