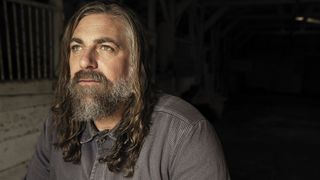 Against all the noise of the global viral/financial maelstrom, The White Buffalo, AKA Californian songwriter Jake Smith, is gearing up to release his sixth album, The Widow’s Walk. The situation has had its negative impacts, as with all of us, but when we catch him on the phone, Smith is sounding buoyed after a successful experiment in pay-per-view live performance.

“It felt good, even if it was a little odd without an audience! Just playing music feels good,” he says. “Honestly, I don’t think there’s anything that you can escape with more than music, you know? At least for moments, you can create a whole different world, where you can lose yourself in it. It made me feel kind of alive and human, for a second there.”

It’s in this hope that we talk to Jake today. To get an understanding of the 10 records that fed into the creation of The White Buffalo’s baritone and broken alt-country confessionals.

“A lot of these albums hit me at a certain point in life,” explains Jake. “But still today I can put them on and sing every word and feel nostalgic about the times in my life when that was happening.”

It’s a musical biography, then, but also a chance to pick up some recommendations, a glimpse at some new worlds to lose yourselves in.

“I didn’t start playing music until really late, so I had this whole time of listening before that. I remember being up at my grandpa’s house in Oregon and sitting on his lap in the living room and listening to a Roger Miller record. I don’t know the name of the album, but I think it was called Golden Hits, though.

"It had some of the shtick-y ones like Dang Me and Chug-A-Lug and he had that ability to skirt the line of crazy, funny and out there and also really serious, heavy songs. I was probably five or six, so it is one of my earliest musical memories. He seemed like he was kind of a wild man and this perpetual state of childlike behaviour [appealed to me] – that you don’t have to play by other people’s rules.”

“For years, it was all country music and country music concerts. It wasn’t until I was in high school that I started making my own decisions about music. Things kind of drastically changed then.

"The Circle Jerks’ Group Sex was one of the first punk albums I was drawn to. It had that ‘fuck authority’, angry kind of thing, but it was also poetic and political. But then a lot of the album is about getting wasted, which hit that kind of high school mentality.

"I’ve always loved Keith Morris [vocals], too. It’s not going to be the most beautiful melody line, but he’s going to say something! But they did have melody. There were parts, choruses, A/B sections. The whole album is 15 minutes long, but there are 14 songs on it and it’s furious, which I love.”

“After The Circle Jerks, there was obviously Misfits and Bad Religion and all these punk bands, but I got a hold of Fugazi’s 13 Songs and it was different. It was something else. It wasn’t punk, or prog, the lyrics had content, there were two singers and there was the power of it, too.

"I still didn’t play any instruments at that point but it felt more technical. It had the impact, the power, the feel. It was a similar mentality of ‘us against the world’ but it was different. It’s one of those albums that I would play from beginning to end and then start over. Every song had its own worth.”

“In this period of my life, I’m in high school and I remember my friend’s dad would sit around and play John Prine and Bob Dylan and old folk songs on the guitar, while we would drink beers and do whatever. That was an impactful time. It’s when I went, ‘Ah man, I should get a guitar’ and when I started listening to songwriters.

"Around 18/19/20, I start getting into Bob Dylan and, later in life, my favourite album became Desire. It’s cool how it’s so live and you’re almost in the room. I know he co-wrote some of the best songs on that album [ with Jacques Levy] – like Hurricane, and Black Diamond Bay, which I don’t think people know about much.

"On this recent album that we did On The Widow’s Walk, I was sort of referencing Desire when I was talking to [producer] Shooter Jennings. The drama and the dynamics – where it feels that live – is something I’ve always been chasing.”

“After that phase, I started diving into other songwriters and I got both Songs Of Leonard Cohen and Songs From A Room, but Songs Of... has Suzanne on it, which still blows my mind. I still don’t know what it’s about entirely.

The way he put words together and the production was really cool. He felt like the antithesis of the hippy movement in some ways, this suited, Jewish guy who was very put together and very complex, but still super emotional.

That was when I started writing songs. I didn’t really dive into learning other people’s songs. I just started writing when I learned a few chords. I wasn’t studying it, because I still didn’t think I was going to be a musician, but it’s just really what I got into.”

“At this point in my life, I’d gone off to college and there’s that whole new group of people you’re meeting and hearing new things. I played at a party at a friend’s house and there was this guy Matt, who was a big supporter of mine and was like, ‘You need to do this.’ He said to me, ‘You kind of remind me of Tom Waits…’ I’d never heard of Tom Waits and so I went to the record store almost immediately after that and I got Rain Dogs.

"I remember getting the CD, going home, smoking a little weed and putting that on. It was so different from anything I’d heard. It was implementing all these musical genres, like polka, and then the rain at the start. I love that album. It’s long, but it’s such a journey.”

“After that, I move to San Francisco and I’m jamming with some guys and I think the bass player turned me onto Uncle Tupelo, which I’d never heard before. When they broke up, Jay Farrar formed Son Volt and I loved the album Trace. It was a lot more focussed than the Uncle Tupelo stuff, it felt a little more adult and put-together.

They were using pedal steels and things, so there were more country elements, but also there was this rock backbone and his voice really speaks to me. It felt like a place, almost. A place in America.

For me, it was a time of confusion, not knowing what you were going to do with your life, and then also whatever drugs and alcohol were involved. There were a lot of grey areas and it felt grey in the city. Trace felt like a similar mood. There was a hopelessness in the album, but with some optimism and I always feel like I skirt that line, too.”

“What record did I listen to when I came out of that time? I’m not sure I ever really did! I’m still stuck in that area. But during that time I also discovered Townes Van Zandt. I’m always trying to get to the root of an emotion and really stand on that. I don’t know know anyone who does that better than Townes Van Zandt and Our Mother The Mountain, in particular,

I always thought it was a masterpiece. It’s got Snake Mountain Blues, Kathleen, St John The Gambler, which were super narrative, then some are personal, some are imagined. He was, sadly, unsuccessful in the majority of his life, partially due to his own doing, but he was extremely successful in the hearts and minds of people who appreciate songwriters.”

“Elliot Smith was around at the same time as I was in San Francisco and was one of the only contemporary songwriters that I really gave a shit about. The self-titled album was hugely impactful for me. He was my idol.

I remember I went to one of his concerts at, I think, The Fillmore and then went to a bar after and he was shooting pool with people in his touring party and everyone was treating him like such a... a pussy, you know? Like, ‘Oh, good job, Elliot!’ Like he was this feeble thing. I was like, ‘What the fuck!?’

I had a conversation with him and was like, ‘Why are you surrounding yourself with these people?’ But I guess that was part of where he came from. That’s the nature of the artist. I go up and down, too. It’s really easy, it’s quick, to feel like you don’t have any worth or purpose if you’re not being productive or touring. He was on an isolated path and maybe he didn’t get to the other side, to the high point. But he still had a huge impact on me.”

“This record took me some listens and I appreciated that there was almost a learning curve. It wasn’t immediate but now it’s one of my favourite albums of all time. Nels Kline is an insane guitar player and it really expanded the musicality. It felt like it was all songs, but they expanded sections and there was this sonic stuff, this dissonance and noise, coming through.

Jeff Tweedy, his stuff is looser and it’s not narratives really, but he often gives inanimate objects emotions, which I think is really cool. He’ll talk about a window breathing or something. I always loved that. At that point in my life, I’d left San Francisco and was doing music full-time but I was really struggling. I stayed in my friend’s guest room for like a year! But I felt like, ‘Fuck it, I’m chasing the dream.’

All my cards were down, even if it was playing in a barbecue joint in Santa Ana every Thursday for 75 bucks, I was doing it. I didn’t know what the path was, but I was committed. Wilco is tied to that feeling.”

The White Buffalo's new album On The Widow's Walk is released via Spinefarm records on 17 April. Find out more at thewhitebuffalo.com