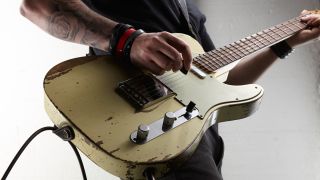 WORLD GUITAR DAY 2018: Many will argue that the best guitar riffs have already been written, a market cornered by the axe-legends of the '60s and '70s. Whilst some of those iconic riffs will never be toppled, it's safe to say that since the turn of the 21st century, the humble guitar riff has been in good hands.

For World Guitar Day we set you the task of voting for your top riff of the 21st century, from a list that highlights just how much trailblazing riff writing has taken place in the last 18 years. 24,000 votes later and we have the results.

What do you think to the winner? Are you suprised at the result? Do you think the riff well has run dry? Share your opinions on socials with the hashtag #WorldGuitarDay.

Scroll to the bottom to check out the top 10. Don't forget to have a bash at learning the winning riff yourself with our video lesson...

38. Ghost - From The Pinnacle To The Pit

29. Trivium - Pull Harder On The Strings Of Your Martyr

12. Pantera - Revolution Is My Name

Did someone say chug? While it’s the pinch-addled opening salvo that immediately wrestles your ear for attention, the main riff of this All Hope Is Gone monster is one of the most satisfying high-gain, palm-muted refrains we can remember. There’s simply no arguing with that punishing drop-A tuning.

True Tom Morello nuts will know that this Zeppelin-esque wrecking-ball first appeared as Enola Gay on the RATM man’s 1996 side project with Vic Bondi, entitled Weatherman. However, its inclusion here is based on its status as the pentatonic hook that first introduced Chris Cornell-fronted rock supergroup Audioslave to the world. Major props to Morello’s slapback delay-aided helicopter noise that builds tension before the drop, too.

Besides supplying a rudimentary lesson in German number pronunciation, this single from breakthrough album Mutter is notable for its stop-start showcase of the simple joys of a chunky drop-D riff – such was the overriding trend in guitar playing at the time. Yet its the terrifying precision of guitarists Richard Z. Kruspe and Paul H. Landers that takes this hook to another, altogether more menacing place.

The song that really broke SOAD - and many guitarists’ fretting fingers - is based around a rapidly alternating semitone pattern that traverses across the fretboard before it becomes a single-note tremolo-picked freakout. Any number of Daron Malakian’s oddball riffs could have occupied this slot, but in terms of sheer earworm status, Chop Suey! is the one.

Look, we know the main riff is technically Justin Chancellor’s tricksy bassline (hence its high ranking in our poll of the best basslines of all time). But Adam Jones’s harmonised doubling warrants a lofty position here, too. Try naming a hammer-on guitar line that’s this addictive while alternating between 5/8 and 7/8. You can’t, can you? Exactly.

5. Queens Of The Stone Age - No One Knows

A rock crossover seemingly destined for festival chant status, QOTSA’s defining anthem, taken from magnum opus Songs For The Deaf, is simplicity itself in melodic terms - essentially based around a single chord, alternating from suspended to minor - but it’s Josh Homme’s unmistakable slides and fills that really bring it to life.

Learn the riff! No One Knows by Queens Of The Stone Age

4. The Darkness - I Believe In A Thing Called Love

Say what you like about the ’70s-rock revivalists, but no bands delivered as well-stocked an arsenal of classic-sounding riffs in the early-noughties as this catsuited Brit bunch. I Believe In A Thing Called Love is perhaps the defining example of the group’s AC/DC-meets-Queen sonic aesthetic _ even if that verse part is a little close for comfort to Brian May’s One Vision riff. We’ll forgive them for those solos, though: phwoar.

John Frusciante’s fiery Strat attack fuels this By The Way-era slice of radio-friendly funk-rock. Fundamentally, the riff is based around two notes, but its melodic content is defined by Frusciante’s cycling chord progression, supplied by the low E string. As is often the case with the ex-Chili Pepper’s playing, it provides yet more proof that sometimes simplicity is the best policy.

Yep, it’s the riff heard in football stadiums around the world, something that could be argued is the defining achievement for any musical refrain. Yet it’s been pipped to the top spot here. Nonetheless, Jack White’s borrowing from the Jimmy Page school of riffdom remains one of the defining sounds of the 21st century. Propulsive yet monolithic, it’s the epitome of what a great riff should be. Oh, and before you ask, that intro is no bass riff: it’s White cannily employing a DigiTech Whammy set to one octave below.

It was always going to come down to this and Seven Nation Army, but Matt Bellamy’s Fuzz Factory-propelled neoclassical freakout clearly continues to enthral guitarists the world over as it lands the coveted number one position – something it also achieved when Total Guitar ran its ‘best riff of the past 10 years’ poll back in 2010.

While echoes of Bach’s Toccata and Fugue in D minor prove that sometimes the oldies are the best, it’s Bellamy’s anarchic delivery and keen sense of melody that launch this wiry guitar line into the stratosphere – its ascending harmonic minor hook, embellished with hammer-ons, pull-offs and bends, has made it compulsory learning for all aspiring guitar players.

The Muse frontman may have recently argued that “the guitar has become a textural instrument rather than a lead instrument”, but we reckon knuckling down and penning a few more winning riffs like this could bring the electric back to the forefront once more. Until then, will anything ever topple it?

Learn the riff! Plug In Baby by Muse

Join us in celebrating World Guitar Day 2018! Get playing, and share your best guitar videos, pictures, tips and stories with hashtags #WGD18 #worldguitarday