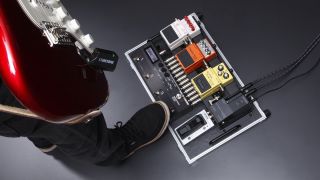 We suspect that one of the best guitar wireless systems on this list might be something that you’ve always thought about adding to your rig, but perhaps you thought it was an unnecessary luxury.

The benefits of guitar wireless systems are obvious – you'll have no more guitar cables to break or get in the way, as well as the freedom to stalk the entire stage during a gig – but we'd forgive you for thinking that a guitar wireless system could be pricey, a pain to set up and prone to developing glitches when you least expect them.

Luckily, these are solved problems, and a Spinal Tap situation isn't on the horizon if you switch to using a wireless system.

If you don't have loads of cash to splash, budget guitar wireless systems are... well, cheap, but the setup is usually simple. If you want to just plug and play, in many cases you do just plug in, turn on and start playing. Let’s take a closer look…

What is the best guitar wireless system?

The Line 6 Relay G10S isn't the cheapest unit here, it's easy to set-up and carries some of the tech and the knowledge of Line 6's top-level touring gear in its DNA. If you're playing smaller venues or you're the only wireless player, then it's a no-brainer. If you want a setup that's easier to build out for larger shows or tours, then it might be worth investing in the slightly pricier G55 (also recommended in this guide).

Meanwhile, at the upper end of the price spectrum, the Shure GLXD16 compares favourably to the touring-grade options, all while being pedalboard-friendly and boasting a built-in guitar tuner. It's possible to outgrow it, sure, but if you're after a simple, rock-solid solution then it's hard to argue with. The only drawback is a range of only 20-30m, but by the time you outgrow that distance you're unlikely to be the only wireless player in the band, meaning it's time for a new setup anyway.

A guitar wireless system comprises two main parts: a transmitter and a receiver. The transmitter is the bit that plugs into the 1/4-inch jack output on your guitar.

In some instances, the transmitter is actually attached to the plug, so you have the guitar equivalent of a USB dongle; in other cases, the transmitter comes as a bodypack that clips to your belt or slips into your pocket. This pack is then connected to the 1/4-inch output on your guitar using a proprietary cable that comes in the box.

Your guitar’s output is then transmitted to the receiver. Some companies offer this in a pedal format that can be slotted directly onto your ‘board, while others offer a completely standalone unit that can sit on your guitar amp or wherever it feels most comfortable. For pro-grade gear, it's common to find that units can be racked into a standard 19" rack, although annoyingly many don't include rack ears as standard. The receiver features an audio output that can be plugged into your amp or anywhere else you might want to send it.

The transmitter in your guitar wireless system will be designed to run on battery power. Increasingly, these systems come with built-in rechargeable batteries, or they take standard batteries that can be changed as required.

Whichever power option you choose, if you head to a gig or practice fully charged there's no need to worry about running out of juice halfway through; today’s guitar wireless systems can keep running for many hours without faltering, so you can rest assured your encore won't be dampened by your hardware giving up the ghost.

Here we’ve rounded up the best guitar wireless systems available to buy right now. There’s an option to suit every budget and requirement. Liberation from your lead is only a few clicks and a courier visit away…

A super-convenient wireless guitar package with plenty of range

The Relay G10S guitar wireless system is designed for integration with pedalboards, thanks to a rugged metal stompbox receiver and 9V power supply operation. Intelligent setup features mean the unit should locate and lock onto the strongest available wireless frequency as soon as the transmitter is docked in the receiver. The system provides 24-bit audio quality with up to 130-foot line-of-sight-range.

Around the rear of the receiver is a control to simulate cable capacitance, plus XLR and 1/4-inch outputs and a USB connection. The included G10T receiver features a rechargeable battery that delivers eight hours of play time on a single charge, so even if you're playing a marathon set, it should have you covered.

The transmitter can be used for up to 12 hours at a time and slots neatly into the receiver's docking port when you need to charge its battery. The receiver can run on two AA batteries or get its juice from the optional PSA-A adapter. Choose the latter option and its DC output can distribute power to one or more other pedals using an optional daisy-chain cable, which could prove useful.

A cheap guitar wireless system that's simple to set up

It's got nothing to do with Bono et al, but the U2 could still be the guitar wireless system you've been looking for. Operation is simple: plug the transmitter into your guitar, the receiver into an effects pedal or amp, then turn them on. Once the two are talking to each other, you're good to go. The setup process is simple, then, and you're also promised high-quality audio performance, great tone and reliability.

The U2 might be made out of plastic, but it promises to be pretty durable. The five-hour running time isn't as much as on some of the other systems, but that should still be more than enough to keep you roaming the stage for an entire gig.

With their smaller, pedalboard-sized systems, Line 6 have proved themselves to guitarists as a reliable option for wireless units, but they also have a larger line that includes pro-level gear.

Despite being cheaper than some of its competitors like the Sennheiser EW 500 series, the G55 is a rackable, touring grade solution that can be combined with other Line 6 wireless units and vocal systems, with up to 12 running at once.

Also, though it's admittedly probably a niche concern, in case you're worried that your tone will be affected by not having runs of guitar cable, the G55 can emulate the frequency rolloff you'd expect from a 25ft length of guitar cable.

The XSW 1-Cl1 has the look of a more traditional wireless system, comprising a bodypack transmitter and desktop receiver unit. You can play for up to 10 hours, while automatic frequency management and sync via remote channel should make for easy setup. If you're playing in a large band, rest assured that you can use up to 10 of these systems simultaneously.

Obviously, if you're looking for a receiver that sits on your pedalboard and a transmitter that plugs straight into your guitar then this isn't the product for you (a cable is supplied to connect your guitar to the transmitter, incidentally) but Sennheiser has been doing the wireless thing for many years now, so if you do plump for the XSW 1-Cl1, you can be sure that you're going with a brand that has a strong reputation in this area.

A cheap wireless guitar system from a respected manufacturer

Like Sennheiser and Shure, AKG is best-known for its microphones, but it offers this wireless system for instrumentalists, too. Like many of the products on this list, the WMS40 Mini promises plug-n-play operation, and you can play for an impressive 30 hours using a single AA battery. The fact that this can quickly be replaced - there's no need to wait for an internal battery to recharge - could count in its favour.

Clear sound quality is also high on the agenda. It works as you'd expect, with the transmitter - which can be put in your pocket or clipped to a belt - connecting to your guitar via a supplied cable, and the desktop receiver outputting audio via a 1/4-inch jack. If you shop around, you'll find that the AKG WMS40 Mini sits at the cheaper end of the price spectrum, making it worth considering if you want a budget guitar wireless system.

A pedalboard-based system that comes with a built-in tuner

A three-part package, this guitar and bass-friendly bundle includes the GLXD6 receiver, which sits on your pedalboard and has the added bonus of a built-in tuner, the GLXD1 bodypack and the WA305 cable, which is used to connect the bodypack to your guitar.

There's automatic frequency management that's designed to deliver a reliable, rock-solid signal, while exceptional audio quality is also promised. You're looking at up to 16 hours of continuous use before the transmitter's built-in batteries need to be recharged, and the transmitter itself is made of metal for extra durability. This is a comprehensive package, then, albeit one that costs more than some of the competition.

Pro gear at a pro price

Sennheiser doesn't need to oversell this unit. It looks professional because it is – and it has a price tag to match. At this level, a lot of the unit's concern is flexibility and expandability for larger setups and stages.

That means in terms of specs that there's ethernet for connecting to Wireless Systems Manager control software to coordinate frequencies in multi-channel setups, the ability to run banks of the units together and a wide variety of available peripherals, from rack mounts to both own-brand and third-party antennas and paddles.

If you're looking for a unit that can grow with your ambitions, then something at this end of the market is it.