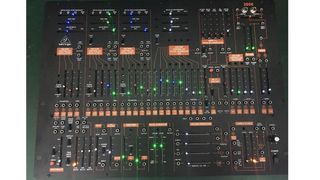 Uli Behringer has promised that the company will be making its own version of the legendary Arp 2600 synth, simply named the 2600.

In the case of ‘will they, won't they?’ the Music Tribe firm has hinted at releasing a clone of the 1971 semi-modular synthesizer for some time, until now.

In a Facebook post on the Behringer page, we are treated to a first look at the metal enclosure, but it is keen to emphasise that it is far from shipping the finished article.

The news came not long after a picture of a PCB board that, very much, fitted the same mould as the 2600 was posted on Behringer’s account.

Just over a week since the initial announcement we have been treated another update, which shows the 2600 all assembled and lights ablaze. Now all we need is to hear this thing in action.

We were also treated to some news on the Synthi VCS clone recently, which was also part of the big leak from 18-months ago. The specs that were listed for the Arp 2600 are as follows: