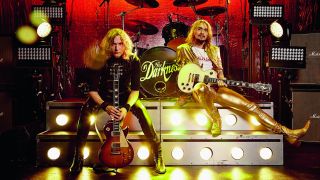 Rock is a broad church, and it makes this category all the more hotly contested. From heavy to classic and blues-inflected, it was the more established players that found favour with voters this year. With a couple of exceptions…

As deserving as our ten all are in this list, the inclusion of two upcoming players who are still early in their careers is especially heartening.

The Darkness: “Less can be more… because more is too much sometimes”

The Hawkins brothers rose from sixth place last year to take the top spot for 2019, fending off 2018's winners Mark Tremonti and Myles Kennedy by a string's breadth. And really who can do deny them? Few have fought as hard for rock, carrying the flame of the Young brothers, Lizzy, Queen and Aerosmith in their hearts.

This year's Easter Is Cancelled continued a remarkable post-reunion run of albums that is easily taken for granted in the way it's expanded their sound. Of course Dan's rhythmic thrust and Justin's lead fire are always at the heart - crossing into climaxes of glorious twin harmony. Most of all, it's clear that this duo love what they do, and cleary the feeling is mutual from you.

Mark Tremonti and Myles Kennedy: our 8 essential tips for guitarists

Last year's winners came close to repeating the feat again, thanks to sixth album Walk The Sky's impact and the sense these two are constantly honing their chops in hotel rooms on the road.

As the decade closes Tremonti stands as one of the standout players we've seen - prolific and that elusive mix of technician and songwriter. Kennedy remains the band's secret weapon; a gifted voice with an equally expressive way with a bluesy vibrato.

Nita Strauss: “To be the first female Ibanez signature artist - that’s what I’ve dreamed of since the very beginning”

Like Tremonti, Nita Strauss's drive and work ethic is inspiring a whole wave of young musicians. Her positive attitude and focus are an important lesson for any young player to learn that opportunities and achievements are hard won. There's also the fact that shred is only part of a wide skillset she's developed during years as a session player.

Ibanez's first female signature artist is really just getting started after 2018's debut solo album. She continues to tour with Alice Cooper and freely shares her insights in playing clinics around the world.

Slash: "Technique can become the main aspiration, but for me, it’s more about expressing some sort of emotional content"

He's such a ubiquitous guitar hero it's easy to take him for granted. That the Guns reunion has been better than anyone could have hoped has only driven his creativity harder with a third album for Myles Kennedy and & The Conspirators.

Moreover, so many try but nobody sounds like him. Slash works hard at it too - guitar has become his solo addiction so instead of becoming a facsimile of past greatness, he's at the top of his game out there.

Five guitar tricks you can learn from John Mayer

Everyone seems to have an opinion on Mayer, but we challenge anyone to listen to his outro solo on recent single I Guess I Just Feel Like and tell us this man doesn't have a divine gift. Indeed, it's Mayer the guitar player who has eclipsed the uber celebrity in recent years. And it's not by accident.

His adventurous work with Dead bodies & Company and free reigning approach to solo releases is a musician in the time of his life.  The masterful sets on his recent world tour showcasing a body of work that

We visit the past, present and future with one of the greatest riff writers and guitar innovators of his generation

Tom told us he's on a zealot's mission  and in 2019 he walked the talk with his Atlas Underground Project, incendiary performances with Prophets Of Rage and a consistent commitment to speaking out about the injustice he finds. But we think he's here mostly because nobody can make a guitar sound like him.

And if a reminder was needed we'll get it in 2020 when Rage Against The Machine reform in a presidential election year. Tom's also told us there's a second solo album coming. A zealot's mission indeed.

"We’re both guitar players at heart; we never intended to be lead singers"

It's easy to overlook at how Alice In Chains have become a fully-fledged two-guitar band with William DuVall and their touring for 2018's Rainier Fog has seen their chemistry as players continue to evolve. DuVall has even managed to put out his first solo album this year with the acoustic melancholy of //One Alone//.

We call Cantrell the grunge Gilmour round these parts and he keeps proving us right. We're fascinated to see where this pair go next.

Anyone who saw the spectacle of Muse's Simulation Theory tour in 2019 will know that Bellamy's Manson guitars are still there at the heart of it all. He continues to be a thrilling player who understands the power of spectacle, and a well placed guitar break.

He's clearly had guitar on his mind more than anyone realised with the surprise news earlier in 2019 that he'd bought Manson Guitar Works in Devon. Things are going to get interesting.

Ariel Posen: “I play hard, I dig in a lot. I like the fight”

What a pleasant surprise to see a new name enter the list this year - and what a player. The Canadian balances a career making original music with Bros Landreth and his own burgeoning solo career that took flight in 2019 with album How Long.

A bluesy Americana player, his beautiful slide work seems effortless (on a baritone with 16-64 strings no less!) but Ariel is putting everything into his craft – few are out there working harder.  He's also a player who puts the song first.

“There’s something about playing that electric guitar real loud that feels like home,” Dan Auerbach told us  ahead of the release of the Black Keys' Let's Rock. And just in case that didn't make it clear enough, the band's latest touring lineup features two additional guitar players.

Let's Rock finds Auerbach returning to a love of electric tones after some time away and cuts to the quick by allowing Auerbach the means to let go, and take on some ZZ Top and Eagles moves on the way.