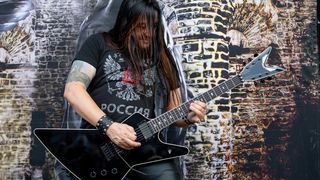 It’s been a long 13 years since Dragonlord released their second album, Black Wings Of Destiny, and no one is more aware of it than guitarist Eric Peterson.

2005 would be a life-changing year for the Californian musician - witnessing the reunion of the band he founded as a teenager, Testament, and ushering in new music to come along with it. As you’d expect, his schedule ended up looking a whole lot busier.

Which is why, all these years later, he’s finally put the finishing touches to Dragonlord’s third full-length, titled Dominion. Having recently inked a new deal with Universal offshoot Spinefarm Records, the guitarist has once again traded the razor-sharp thrash riffing he’s arguably more known for in favour of more gothic, black-metal-inspired orchestrations...

“This kind of [extreme metal] genre is where my heart’s at, definitely,” he enthuses down a crackly phoneline to MusicRadar. “Dragonlord has been around since 1999, but I’m super-busy with Testament and it’s hard to pursue both. This record was made over a long time - four years in fact - and not created all at once.”

As fate would have it, the extra time would only aid Peterson in realising the ideas in his head and help convey them in the most effective of ways...

“I would get stuff done whenever I could, but in hindsight all those years brought a lot of opportunities for the music,” he continues.

“Like finding a new drummer [Alex Bent, ex-Trivium/Battlecross] for better foundations and getting [Celtic fantasy singer] Leah to do all the choirs. Developments like that made the record better in my eyes, instead of going into the studio for a month and finishing it. By the time I got to the vocals at the end, I could paint a bigger picture of what the music is about!”

To paint these bigger pictures, the guitarist chose to utilise a handful of tried-and-tested tools for the job, along with some more unusual ones - perhaps most notably of all, a Joe Bonamassa signature Gibson Les Paul Goldtop. Which, truth be told, isn’t an instrument normally associated with hellish fires of black metal...

“I only discovered his music about six or seven years ago, when he did the Royal Albert Hall DVD. I saw the footage on television and thought it was Don Henley at first and then when he went into the solo, I was like, ‘Holy shit! Who is this guy?!’ And then later on, I remembered some kid playing with BB King on the news and figured it was the same guy.

“He’s the perfect example of someone who stuck with it and became a force to be reckoned with - especially when it comes to the picking side of things.”

Along with the Bonamassa Goldtop that was used for the bulk of the work, the guitarist used another signature Gibson few would expect him to have in the collection - a Marc Bolan Les Paul - plus an EMG-loaded Strat to tap into new sonic dimensions...

“I switched the stock pickups out for EMGs, but they’re still single coil and modelled after the same Fender sound,” he says.

“It’s not like I was putting something totally different and heavy in my Strat, I just wanted to get rid of the noise that the original pickups had. There was that with a Tube Screamer in front, my signature Dean and then this Marc Bolan Les Paul with PAFs that sounded nice and juicy through the EVH 5150 MKIII 50-watt head.

“I was after more of a '70s hard-rock guitar tone, right before metal got crunchy and midrange-y. Obviously, there’s still a bit of crunch because of the way I play, with all the muting and picking, but I wasn’t really after the modern metal crunch sound.”

“Everything is a drum to me; it has a beat and pace. It might be single notes or quarter notes, through to 32nd notes going super-fast. I think of my right hand as the drum within my playing; it's in charge of the beat. So I will warm up on the sixth string, muting quarter notes and imagining the drum beat underneath it.

“Then I will work my way towards playing really fast, almost like doing snare rolls with my picking hand while keeping that original beat. You can apply that to any string and even use it for solos. It took me a while to realise that; I used to think that would only help with riffing on the low E.

“Playing slow is probably the best way to play fast! Start slow and don’t try to play fast right away… you need to lock in and know exactly what you’re doing, to the point of being able to do it with your eyes closed. And you don’t get there without learning each and every step slowly but surely.

“Always warm up slowly on a single string and build from there. Scales are a great way of memorising the neck, because you can repeat the patterns all over the neck. From the blues scale to the diminished and all the jazz scales, they will all help you realise what you can do musically and what certain notes can make people feel. If you want to connect your two hands together, that’s the way to do it.”

2. Imagine you're making the soundtrack to your own movie

“Whatever you are doing or into, there is always music somewhere in there. Watch a movie and listen out for the score. Then imagine your own movie… what kind of score would it need and what would those ideas sound like?

“The new Dragonlord stuff is very cinematic; I tried to apply that feeling to everything on this record. It became the backbone of how I think - whatever I’m watching will come out eventually.

“People often get stuck writing riffs or creating, and it’s important to remember you can find an influence from any of the arts, from reading to looking at a painting. Maybe all the heavy metal and gothic influences came from watching The Exorcist when I was clearly too young, haha!

“Of course with guitar playing, there are a lot of great players out there to get influenced by. I tend to go back to the old stuff when they were first setting the world on fire, even though a lot of my favourite guitarists are still doing great things.

“Tony Iommi is a big one for me, along with Pat Travers, Michael Schenker, Uli Jon Roth and Eddie Van Halen. If I played the hell out of it when I was growing up, I will go back and find new inspiration in there.

“Before the 2000s, it felt like the decades were way longer, haha! You can hear how the sounds of each era would change, but I’m not sure if it’s quite the same any more.”

3. Know your limits before trying to overcome them

“There are a couple of things I’ve recorded in Testament that are difficult for even me to play. One song is called A Day In The Death and another called True American Hate, which were both on Dark Roots Of Earth and feature some really fast bursts of picking. Same goes for Dangers Of The Faithless on the album before, The Formation Of Damnation, which is more of a counting thing - it’s not on the one all the time and there are loads of fives, sevens and nines!

“I try not to think of the counting; sometimes I’ll make up something and it’s the other guys that will tell me it’s in 7/4 and I’m like, ‘What are you talking about?’ Those extra beats are almost more like Rush, still rock but kinda off. Meshuggah do a lot of crazy math stuff, too, mixing it all up.

“One of the earlier songs from our debut, Apocalyptic City, is relentless. I can’t play that fast any more. But I would say it’s a good exercise to build speed on your right hand. When we recorded it, I was watching Gene [Hoglan, drums] play and telling him, ‘Dude, that’s too fast!’ Trying to do my parts later felt insane. If you get a blast drummer, well, that’s what they do!

“It’s a stamina thing that comes down to perseverance. You have to be into it. Sometimes ahead of the trickier parts, I almost think about it early to prepare myself and not fuck it up. Playing really tight and intricate things, while also harmonising with another guitarist, is not easy.”

4. Learn from everyone in your band

“Chemistry is a big part of it. You have to practise together a lot - me and [fellow Testament guitarist] Alex Skolnick did that a lot in the early years. Now we don’t have to; we know how each other play. Sometimes we keep each other in check - I might say, ‘Hey Al, don’t do this while I’m doing this!’ but to be honest, we’ve been playing so long we totally understand each other.

“At the beginning, we wanted the same tone, and then it became more like us not wanting our own tone to sound anything like the other one. We’re very different, but it works!

“You have to open your mind and find a middle ground. It’s about what’s best for the band - don’t think about yourself; it should be more of a team effort. Keep that in your head and remember you are only half of the guitar player in the band. It’s never about me… it’s about us.

“I’m probably not known for lead stuff, but I think after playing rhythms for 20 years, you start understanding what works best over certain chords. I would make up rhythms for Alex and he’d play over them and give me ideas for more chords or movements within the music.

“I’d say we both learned a lot from each other: me being more aggressive and saying everything has to sound evil and him being more of a ‘musical’ musician. Now I’m think more along symphonic lines... instead of just one sound only, there are a lot more darker colours in the mix.”

5. Get lost in music

“I record myself in order to write riffs, so I would suggest loading up Logic or Pro Tools or whatever is on your computer and just keep playing. Sometimes I play with nothing behind me, sometimes I’ll play against a click track at 140bpm and go nuts. Eventually you’ll get lost in the moment and stop thinking so hard - and that’s when you come up with the coolest ideas.

“Whenever I listen back to what I’ve written over the week, those are the bits I take forward to build on - when I’m not thinking as hard about what I’m doing and just going with the flow.

“Also, it’s good to record yourself if you want to be a proper musician. You’ll avoid that red light fever that often happens to people where they freeze as soon as someone hits record. Ultimately, you’ll be more prepared for the challenges of working in a studio.”

Dominion is out on 21 September via Spinefarm Records.