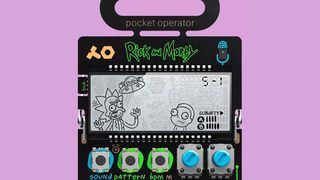 Teenage Engineering confirmed back in May that it had collaborated with co-creator, producer and voice of Rick and Morty, Justin Roiland, to create a limited edition Pocket Operator instrument, the PO-137

It's now been released, with a list price of £85, but the bad news is that it already appears to have sold out.

The PO-137 is a vocal synth and sampler, much like the PO-33 Speak, but comes with eight different voice character sampling options. Roiland has lent his vocal talents to the project, and the instrument also features new custom Rick and Morty visuals within the animated LCD screen.

The Pocket Operator includes all the same features as the rest of the Metal Series, such as the built-in microphone, 120-second sample memory, folding stand and alarm clock.

When the PO-137 will be back in stock - and if, as planned, it makes it to retail stores in November - remains to be seen, but you can check it out on the Teenage Engineering website.