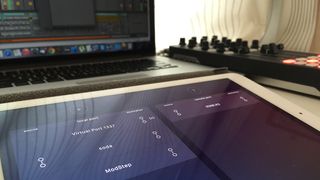 It sounds like a mobile music production dream come true - actual, genuine Audio Units plugins running right there within your iPhone or iPad DAW! But is it all good news, or are there caveats?

Five iOS developers tell us what they reckon we can expect from this potentially industry-shaking event.

"Yes! I'm almost sure the Audio Unit extension will be a game changer for music production on iOS. Inter-App Audio is a good thing, but it lacks native support for parameters, presets and automation. The AU extension format takes care of all these things. I think Apple hit the nail this time."

"These aren't Audio Units like the ones in your plugins folder on your MacBook, in the strictest sense. And the iOS platform doesn't (yet) have the power to run big, resource-hungry mega-plugins like we regularly see on desktops. It's a different platform with its own unique challenges (not least of which is the iOS App Store pricing model), and it will be interesting to see how things play out.

"Overall, we feel that, like most things Apple does in the music producer market, it will be very good for consumers, but a huge headache for developers."

"Enhancing iOS/desktop communication and simplifying the development process for these platforms can only be beneficial to musicians. Whenever technical boundaries like these disappear, creative possibilities arise.

"Technically speaking, an audio iOS app is already an Audio Unit, and IAA already acts as a mechanism to connect apps together. The remaining problem is that a host app currently can't show another app as a sub-view. However, the newly announced split view greatly improves this situation, and being able to run several processors within an app will be a welcome and powerful change."

"We very much welcome Apple's step in this direction. An isolationist philosophy just doesn't work in the context of music production.

"We're a bit concerned about the restrictions on app extensions' user interfaces and CPU usage, though. Our iOS apps are versatile instruments with deep and thought-out feature sets: each a consistent artwork/instrument in its own right. It doesn't really make sense to cut them up and extend bits and pieces to the AU interface."

"IAA and Audiobus are good things, but lack the all-in-one integration that professionals are looking for. Converting existing AUs will be a challenge for developers, who will need to redesign UIs and optimise for touch interaction, but I'm sure that we're speaking not only for ourselves when we say that products are already in the pipeline."