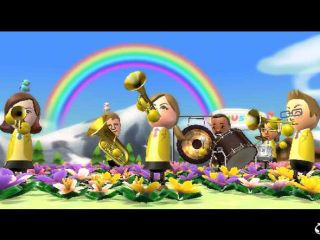 A Guns N'Roses/Wii Music tie-in probably isn't in the offing.

Bedroom-based hackers have been using their Wii Remotes to control music software for months, but now Nintendo has launched an official music-making title for its flagship console: Wii Music.

Demonstrated at the E3 show in Los Angeles, the game promises to let users play over 50 instruments and makes use of a variety of Wii peripherals.

The drum kit can be played using a combination of the Remote, Nunchuk and Wii Balance Board, for example (the latter device will presumably be used for kicks and hi-hats), and you can get busy on the saxophone by blowing into the Wii Remote's speaker.

Speaking at the Wii Music launch, Nintendo legend Shigeru Miyamoto said that "most music games require you to press buttons with precise timing to symbols on screen, but we've designed Wii Music to allow everyone, including those who can't read music, to enjoy the experience of playing music".

This sounds like an admirable goal, but it does seem to suggest that Wii Music will be more suited to people who want a 'can't hit a wrong note' experience than budding producers. That said, it is being reported that the game will enable you to improvise on the instruments and record your performances.

Wii Music is set to be launched later this year - we'll bring you more details as we get them. You can watch a promo video for the game on GamesRadar, our sister website.