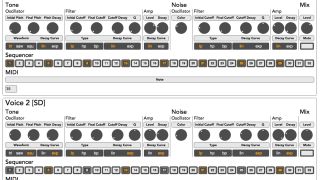 WebXOX is a four-voiced drum machine and sequencer created by Irritant Creative - and it will run for free, in your web browser.

Playable in the most recent desktop and iOS versions of Chrome, Safari and Firefox, the the surprisingly fully featured WebXOX takes its cues from the classic Roland drum machines.

The sound is entirely generated from within the browser, with no samples used, having been designed specifically to showcase the capabilities of Web Audio API.

A single algorithm powers each of the four voices, but it isn't just able to recreate your average kick, snare, hihat and cowbell sound - we've already squeezed a wide range of percussive sounds out of the WebXOX.

Check it out for yourself on the WebXOX website.