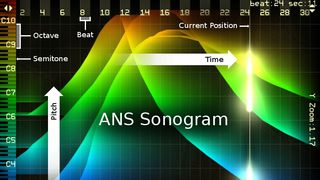 Looks as spacey as it sounds: the Virtual ANS

A retro Russian synth beloved of 1970s film composers has been reinvented as a soft synth across all major platforms. Ladies and господа, we give you the Virtual ANS.

The sim is based upon the Russian synthesizer ANS - a photoelectronic microtonal/spectral musical instrument created by engineer Evgeny Murzin in the mid 20th century.

As you'd expect the Virtual ANS offers a Virtual Analogue sound engine, but it also offers an unlimited number of pure tone generators, and a rather attractive looking sonogram editor - the spectrum of which can be drawn and played simultaneously. You will also find Audiobus support and direct export to iTunes.

We hardly need add that developer Alexander Zolotov describes this synth as offering "unusual, deep, atmospheric sounds", though you might be interested to hear that those sounds comprised the OST of Russian cinematic masterpiece Solaris - later remade as a George Clooney vehicle.

Check the video below to listen to the synth in action, and if you're charmed, you can download VirtualANS links at Warmplace.ru.