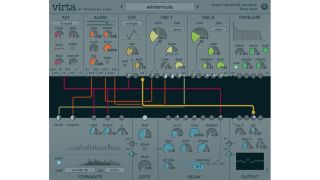 Virta has that familiar Madrona Labs look about it.

Madrona Labs has announced Virta, a new software synth that enables you to use your voice as part of the sound design process. The plugin, which is billed as a "patchable tool box for creative sound design," enables you to create new sounds that are controlled in real-time by vocals or other instruments.

Virta's input is analysed to generate, pitch, noisiness and brightness signals, which are then sent through a patcher and onto a selection of modules. These include an LFO, two oscillators, a formants module, a pitchshifting/delay unit, an envelope, gate and two pannable outputs with limiter.

"A certain DJ/producer, a person with a room full of classic synths, was saying that what they wanted most was to just sing and vocalise, play around with mouth sounds, and have that turned into music," says Madrona Labs founder Randy Jones.

"I thought of all my favourite takes on this idea, from the pitch trackers on some modular synths to weird primitive samplers from the '80s. With a modern pitch detector and other analysis tools, and the patchable interface of Aalto, I knew I could make something really fun to use, capable of unlocking wild new sounds."

Virta will go on sale for PC and Mac on Monday 28 March. I'll be available through the Madrona Labs website priced at $89.