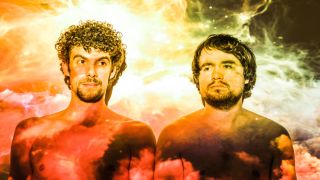 "Recently, somebody called us 'campfire house'," adds Marko 'Berger' Vidovic. "I don't really know what that means, but I kinda like it."

Not many acts raid the Billboard Dance charts with their debut release, but that's exactly what happened to Tube & Berger. The jerking, hypnotic Straight Ahead featured vocals from punk goddess Chrissie Hynde and headed Billboard's Dance Airplay chart back in 2004. It was followed by a string of Beatport Number Ones - Lovebreak, Come On Now (Set It Off), Imprint Of Pleasure - and top notch remixes, each one seeming to redefine their musical ethos.

"We don't purposely search out a different style for each release," explains Rörig. "It just happens. Sometimes, we actually try to write a song that sounds like our last release, but it never seems to go as we planned. For us, the studio is more like a mad kitchen than a laboratory. Making music cannot be a science because you never know what the end result will be."

Is it true that you two started out in a punk band?

Arndt Rörig: "Yeah, we were listening to the Ramones and the Sex Pistols. Lots of loud guitars. For us, as young kids, this music felt like a revolution. It was an escape from everyday life.

"From there, we moved onto Pink Floyd. Electronic music and techno and house didn't really come into our heads until we first heard Daft Punk and the Chemical Brothers. I suppose it reminded us of punk; the sound of revolution."

So you immediately ditched the guitars and invested in a computer?

Marko Vidovic: "Unfortunately, it wasn't that simple. We had absolutely no money, and the only thing we could afford was [Propellerhead] ReBirth. Luckily, we had an old PC, which we just used for word processing and games, and we ran ReBirth on that.

"Looking back, I always laugh at how basic it was, but we had so much fun making noises… making songs that sounded like nothing else we'd ever heard. We started going to a few techno clubs and, little by little, we fell in love with electronic music.

"These days, you can get ReBirth as a simple app to play with while you're waiting for a bus, but I can't tell you how much of a difference it made to our lives. The computer no longer sat in the corner; it was the centre of our musical world."

AR: "Our next idea was a bit crazy, but we learned so many valuable lessons from it. We saved up €2000 and booked a session in a professional studio in Düsseldorf, not far from our home town, Solingen. We thought we were going to release a trance hit and make loads of money. We really thought it was that easy!"

Did the track ever get released?

AR: "No, but we saw what was possible with electronic music. We got introduced to synthesisers like the SuperNova and the Virus. And we learned that making a good dance track is not just about surrounding yourself with the best quality equipment… all that equipment will only work if you have a decent idea. We were so naïve. We didn't know the first thing about production."

MV: "And we were too lazy to read any books or manuals!"

AR: "We didn't even know about separate sequencer programs like Cubase or Logic. 'Oh, I see - you program the notes in a sequencer!' Once we understood how it worked, we decided to go for Cubase, because we read somewhere that Daft Punk used it. If it was good enough for them, it was good enough for us. VSTs were beginning to make an appearance and, once again, here was another musical revolution."

MV: "Our studio - we called it a studio, but it was only a room with some egg cartons on the wall - was so limited. The sound was awful. You just had to move your head a few inches to the left or right and the bass disappeared or the top-end suddenly started screaming in your ears.

"Our main effect was an Ibanez bass distortion pedal. When we first saw VSTs, we were so excited. We could never afford to buy a real synth or effects, but VSTs made music accessible to people like us - people who were broke! We had an early Native Instruments Pro-53 and the very first version of Reaktor, which we used a lot. You have to be careful with Reaktor, though… you can end up getting way too deep into the programming.

Was that Straight Ahead?

AR: "Yeah… Our first release was a hit all over the world. We couldn't believe it. It changed everything for us; it was a point of no return. Without that song, we probably wouldn't have got the chance to fall into the music business.

"At first, we thought, 'Great - we're going to earn lots of money', so we quit our jobs and quit college. It was only then that we realised you didn't really make that much money from a single. We also signed some bad contracts and made some silly mistakes. It was a whole year of learning. Even though we'd had our first hit, it felt like we had to make a lot of changes. We had to start again!"

Technical changes? Changes in the studio?

MV: "We knew it was time to upgrade the studio. If we were going to start calling ourselves DJs and producers, we needed some decent speakers. So, we invested in a pair of Mackie HR824s and worked out where we were supposed to position them."

AR: "Because everybody now listens to music in very different situations - computer, headphones, in the car - we have sort of forgotten just how important your speakers are. Getting those Mackies was almost as important for us as when we first heard ReBirth."

MV: "We have tried Logic and Pro Tools over the years, but we've stayed with Cubase, with the addition of Ableton, ReWired. If we'd not been able to get the two to talk to each other, we might have switched from Cubase, but now we've got the best of both worlds. The familiarity of Cubase and the speed of Ableton."

AR: "There are actually three Tube & Berger studios. The main one - now powered by an iMac - plus a MacBook Pro to travel with and a MacBook Air for live. We completely moved over to Macs about a year ago. Not for any particular reason… Well, OK, we were told the Macs were a lot more stable than PCs, but we still get problems.

"These days, the main tools are samples and loops, the Arturia Mini V and ARP2600, Dunes 1 and 2, plus Sylenth1, with a lot of K-Size patches. We would definitely recommend him. After that, it's Native Instruments all the way: Kontakt, Battery, Reaktor. We love them!

"A lot of basslines come from Sylenth1, and it's very important to keep focused on those basslines as a song progresses. As the song builds, you can sometimes find that the feeling and the energy will disappear from the bass and drums. Of course, your first instinct is to add more and more, but no, that isn't always the answer.

"I wouldn't say we were minimal, but we have been associated with that sound in the past, and what we learned is that sometimes it's the simple drum patterns and basslines that give you the greatest results. Don't just add more and more and more; if you're not careful, you add so much weight that the song feels off balance."

MV: "When we're ready to mix a song, we try to listen out for what we call 'disturbers'. Those are the sounds that don't add anything good to the mix… they're unsettling everything else. Sometimes, it can be a certain note, but it might just be a particular snare sound or percussion noise."

There's always a wonderful groove to Tube & Berger rhythms. Is that all about finding the right loop, or hours of intricate programming?

MV: "We don't come from that Akai generation of drum programmers. We don't spend hours and hours pressing buttons to create a perfect drum pattern in the sequencer. Most of our drums are… They come from instinct. We tend to throw bits of different loops together and then try to feel what's missing, rather than looking at the numbers on the screen. Rhythm is about the stomach - it's a gut feeling.

"One of the most annoying things in the studio is spending a couple of days getting the drums right and then, when the song starts to take shape, realising that the drum sounds no longer work. Because of a certain synth line, your snare feels out of place. A song is like a family. It grows, it changes, people come and people go, people fight… All the time, you try to keep the peace and find the harmony of everything working together."

You use live instruments, too - there are some pictures of you with guitars on stage.

AR: "There's a lot of banging and strumming that happens in the studio. It doesn't always sound in tune or in time, but we make it work."

Is the guitar on Imprint Of Pleasure live or a sample?

AR: "That was live, played on a guitar that cost us €20 from a junk shop. I don't think the strings had ever been changed on it, but the sound gave a little bit of old magic. We recorded the guitar with me sitting in the middle of a lot of empty beer bottles on a very cheap microphone. We didn't worry about signal levels or anything like that; it was just plug and play.

"A friend of ours is one of the best producers in Germany, and when he heard it, he said, 'My God… Who EQed that guitar?!' He told us it was very extreme and shouldn't have worked… but it did. Don't listen to the rules. Always trust your instinct."

We started out talking about your ever-changing styles and sounds. Where do you see things heading in 2015, not just for you, but electronic music in general?

MV: "One thing I think is very interesting is how rock music has changed in the last few years - I know we're talking about dance music, but I think this will affect the music business in general. The age of the rock band is almost over. If you've got four or five people in a band with a little bit of success, it's almost impossible to get out on the road, because it costs too much. If a promoter can hire a DJ with his laptop and two USB sticks for half the money… we all know what will happen. The big bands can still make it pay, but it's increasingly difficult for rock bands to make money."

Look at what happened when U2 released their recent album. They gave it away…

AR: "These days, you don't make money from selling records. You make your money from playing live and from merchandise. You have to look at new ways to promote yourself and your music. But you don't have to play the pop game. The music industry has realised that there's money to be made from the electronic underground. The industry is looking at DJs and producers who aren't household names, and they see packed-out venues every weekend.

"Not everyone is happy with the changes that are happening. I remember being at ADE [Amsterdam Dance Event] a few years ago and people were complaining about downloads and how it was going to kill us all. Every label was going bankrupt and it was the end of dance music.