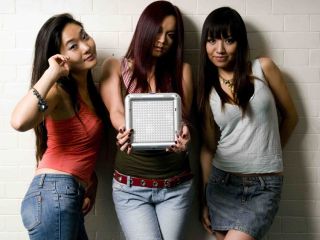 The Tenoirons: they don't do acoustic sets.

We've had artists and bands who've been named after favourite bits of gear before - 808 State, Kid606 and Aphex Twin, for example - but The Tenorions are slightly different in that all their music is made on the instrument that inspired their moniker: Yamaha's Tenori-on.

An all-girl techno outfit, the band is the brainchild of Jason Air, who's known for his drum 'n' bass and hip-hop work. Two core members, Nynn and Cici, write the music, while a third, Fiona, joins them on stage for live performances.

On the subject of the Tenori-on, Nynn says: "For us it shows a totally new way of creating music. And it's so much fun to play - it's as easy and intuitive to pick up as Nintendo, but the results… well, we're creating art!".

The Tenorions have recently been touring Spain and Portugal, while in the UK, they've appeared on the Paul O'Grady show. You can see what they've got on their YouTube channel - they're certainly more watchable than many electronica acts, though at times, they do look more like they're wielding next-gen Chip and PIN machines than cutting-edge instruments.