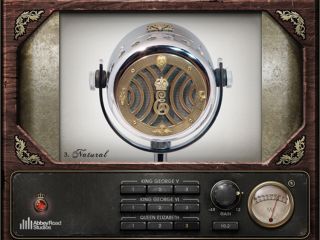 The Queen Elizabeth is one of three mics modelled in the plug-in.

The King's Speech has become something of a movie sensation, scooping up awards left, right and centre and royally entertaining audiences, too. And now there's even a music software tie-in (sort of), with Waves and Abbey Road Studios announcing The King's Microphones.

This is the first collaboration between the plug-in developer and studio and models three mics that were recently restored and used in The King's Speech. The idea is that these will give your recordings a vintage/lo-fi sound.

Discussing the project, Peter Cobbin, senior recording engineer at Abbey Road Studios, said "Last year I had the fantastic opportunity to use the microphones built for the British Royal family whilst recording the score for The King's Speech. This year I am proud that the combined efforts of Abbey Road Studios and Waves have produced a wonderful authentic plug-in that captures the very essence of these beautiful and rare microphones."

- H.M. King George V model:
This Carbon microphone was designed by Marconi-Reisz circa 1925. It consists of fine carbon dust held between output electrodes, fronted by a mica diaphragm and encased in a grand marble shell. Carbon microphones are rarely used today. Despite the model's limited bandwidth and relatively high noise floor, it was one of the best microphones available at the time, and this particular microphone and plugin have a wonderful colored sound unlike any mics manufactured today.

- H.M. King George VI and H.M. Queen Elizabeth models:
Both of these microphones were based on the EMI CPM201 model. These moving coil microphones were specially built in 1936, encased in silver by G&S Co Ltd of London. The diaphragm is made of PVC and shaped almost like a loudspeaker cone. It is presumed these microphones were designed for outside broadcast, as they are more robust than the more popular ribbon microphones of the time.

You can find out more about The King's Microphones on the Waves website. It costs $99.