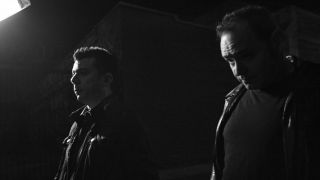 At first, Scott Kirkland didn't think that anything was wrong. Earlier this year, while working with his Crystal Method partner Ken Jordan on the duo's upcoming fifth album, he experienced some strange headaches, but he chalked them up to "too much traveling and probably too much drinking. I thought I needed to chill out a bit." Nevertheless, he went to see a doctor, who scheduled a brain MRI, which revealed the presence of benign posterior fossa arachnoid cyst.

"That's a mouthful," Kirkland says with a laugh. "I had to have the doctor write it out. The good news is that it was benign - it wasn't cancer. But it was the kind of thing they had to remove pretty quickly. If it ruptured at any point, particularly if I was traveling or on stage or something, that could be pretty bad."

The initial surgery to remove what Kirkland describes as a cyst "somewhere between the size of a roll of quarters and a Twinkie" went swimmingly. After a week, he was back in the studio with Jordan working on tracks. And that's when the real trouble started.

"I came down with a bacterial infection," Kirkland explains. "When stuff like that hits, things can get scary. I did time in the ICU, had to have a spinal tap - it wasn't a great time."

Jordan admits that the post-op period of the ordeal was the most frightening time for him, as well. "Whenever you find out that your friend and partner of 20 years is going to have brain surgery, that's a big deal," he says. "We knew it wasn't cancer and that the surgery wasn't too invasive, so those were good things. The infection made things super-scary."

After another month of recuperation at home, Kirkland was well enough to rejoin Jordan in the studio to finish the band's follow-up to 2009's Divided By Night. Most of the album was locked before Kirkland's surgery, but Jordan says that the time away from the sessions offered the two some much-needed perspective. "We're notorious as it is when it comes to taking our time with productions," he says. "As soon as Scott came back, we felt as though we should give everything a fresh listen. We didn't have a real deadline, so we were able to work on some things and make the album better."

Jordan says that the agenda for the new set was to get back to the spirit, if not the sound, of the Crystal Method's 1997 debut album, Vegas. "A couple of years in the technology world is a long time," he says, "so 16 years is a lifetime. We also wanted to combine how we made Vegas with all of the tools that are available to us today."

"We went back and brought out some of the old analogue stuff," says Kirkland. "We opened up the oscillators and filters and just really looked for something that we hadn't heard in a while. Some of the sounds were really cheap and dirty and aggressive, and they took us by surprise."

The 11-track self-titled album, which features appearances by country star LeAnn Rimes and The Voice runner-up Dia Frampton, among others, will be released in January. The first single is the gritty, mega-kick-heavy Emulator, which Kirkland says was first called Funk Muffin.

"When we start songs, we have these child-like names that we give them," he says. "Eventually, we changed it to Emulator. It's a cool track. We love when House music has a really regimented kick and bass, but there's still a lot of going on between the spaces that gives it a lot of energy. That's something we wanted to explore in the song. There's some cool dirt in the distortion and a lot of the tones. It's very cinematic, with a lot of antagonizing sounds."

You can listen to Emulator below. To pre-order The Crystal Method's self-titled album, click here.