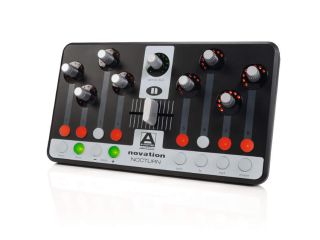 Novation's Nocturn was the bargain of 2008.

On the one hand, there were the hardware and software releases that took an existing idea and improved on it - usually in the area of usability or quality (sometimes both) - but on the other, we also saw pieces of gear that were genuinely innovative.

Listed below are ten of the very best products to appear on MusicRadar this year - a hearty slap on the back to everyone involved in their development.

With the Nocturn, Novation proved that it's possible to produce a groundbreaking product that isn't prohibitively expensive. The device is powered by the latest version of the company's Automap technology: controller assignments are made automatically and then displayed in semi-transparent on-screen interface. It's a brilliant concept, and one that works just as well in action as it does on paper. Bargain of the year, without question.

Far more than just a 4-octave keyboard, the MPK49 is stuffed with control features. A set of MPC-style pads catches the eye (these have Note Repeat functionality), and there's also a bank of eight knobs, faders and switches. You'll even find an arpeggiator onboard, so if you're looking for a playable keyboard that does it all, your search is over.

The Omnisphere hype machine was cranked up the moment the product was announced in January at the 2008 Winter NAMM show, but we had to wait until September to find out if it was worthy of such a big build-up. As it turned out, Spectrasonics delivered on its promises: powered by the company's new STEAM engine, this instrument produces sounds of the type you won't find anywhere else.

By the end of 2008, Traktor was starting to look just a little cumbersome, but the recent 'Pro' update has pulled it right back on track. Featuring a streamlined interface - everything now feels like it's where you want it to be - and new effects and mixer sections, this is a terrific solution for anyone who wants to start mixing in software. In fact, it's the best DJ-specific app there is.

The chances are that this stunning console is always going to be out of your financial reach, but that doesn't make it any less desirable. The Matrix is a 16-channel, 40-input mixing solution that also serves as a powerful DAW controller; the idea is that you configure it according to the way you want to work. Yes, it's very expensive, but it's also hugely impressive.

Although it faced stiff competition from Waldorf's Blofeld, the Mopho sneaked in at the last minute to claim the title of top mini synth of MusicRadar's year. Essentially, it's a single-channel version of Smith's terrific Prophet 08, but with the addition of sub-oscillators to beef up the sound. And then there's the price - £280 for an analogue synth of this quality represents something of a steal.

You just know these speakers are going to be top quality as soon as you take them out of the box - they come in fine-looking wood veneer cabinets and with marble-effect speaker comes. Each cabinet contains two 6.5-inch drivers and a single inverted dome tweeter, and the result is one of the most accurate and engaging monitors we've ever had the pleasure of using.

It might not offer anything radically new - in fact, it's basically a stripped-down version of Korg's M3 - but the highly portable M50 deserves plaudits simply because it's so damn practical. Its 608 patches and 384 combis are top quality, there's an excellent touchscreen, and the keyboard integrates seamlessly with your DAW. And then there's the price - you won't find better specs for this money.

With a name that's synonymous with high-end quality, Apogee was always likely to produce a winner when it entered the home studio market. The Duet is as elegant a 2-in/2-out interface as you're ever likely to see: it looks stunning and the large, multi-function control knob is a great idea. It's a perfect solution for anyone who uses an Apple audio application, though sadly, its reliance on FireWire means that owners of the new MacBook need not apply.

Those who thought that the likes of Native Instruments, IK Multimedia and Waves had the guitar amp plug-in market sewn up were forced to think again when Studio Devil released this little beauty. It's as simple as it is effective: you're given the bare minimum of controls, so even luddite guitarists should be able to get their heads around it. What's more, it sounds great.