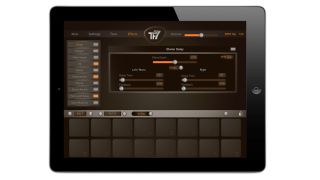 Developer Tenacious Frog has released TF7, a user-friendly FM synthesiser for iOS with a pad-style control surface designed for the touch interface.

The synth itself features seven editable FM algorithms and ten effects. It's free to download from the app store, although an in app purchase for £1.99/$2.99 is required to access the full features of the synth engine. It also supports Core-MIDI control and is Audiobus compatible.

The app's control window, meanwhile, is a six by eight pad grid, which is designed to encourage players to compose visual by playing around shapes and patterns across its surface. It can be locked to a scale too, so that users can play without the fear of hitting a bum note. There's also a morph pad, which allows users to blend between synth sounds whilst playing.

TF7 is available to download now from the App Store.