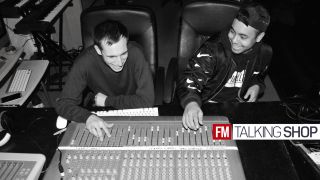 Given their impressive talent for re-interpreting the sounds of classic Rave, Jungle and Trip-Hop into cutting-edge club tunes, it's little surprise that London-based newcomers Wallwork & RZR have quickly gained themselves a reputation as a pair of producers worth keeping a close eye on.

With their latest EP, Don't Panic, out on Nervous Horizon this week, FM caught up with Wallwork to find out more about the pair's warehouse studio space and their approach to creating sounds.

"I've been making music since I was a child really. I tried to get guitar lessons at the age of six, but my hands were too small and it was too much of a headache so I got into drumming and percussion. I also used to spend hours writing pop rock songs and jamming on toy keyboards. When I was a teenager I played the drums in bands with my friends and Ady (RZR) used to play guitar. So we both have musical backgrounds.

"The greatest inspiration for me was probably my dad's huge record collection, which had everything: from '60s-'70s Rock, Jazz, Hip Hop, Trip Hop and very experimental artists. Listening to bands like Portishead, Massive Attack, Bjork and Lamb in my first years of primary school on loop definitely influenced a lot of my electronic music production."

"Our studio is in a huge ex rubber factory in Hackney Wick. We share the space with other artists and creatives, but we have our own section of the warehouse just dedicated to the studio and music. I also live here. I run it with one of my best friends and fellow producer and engineer Moritz Kerschbaumer. It's also home to our label Nervous Horizon. We have been here for about a year, before we had all of the gear in our bedrooms."

"RZR also has his home set up with Mackies and a Microkorg, the mixes that come out of his little room sound as good as a pro studio.

"We use a balance of hardware and plug-ins. Both things are very important, and the sky is the limit when you combine both. We are against people that are just stuck in the box, not wanting to experiment with machines, always in their little comfort zone on their laptop. Fair enough if you don't have the money to buy the gear. But I see so many young producers like us enter our studio, or other studios full of gear, and they just aren't interested in using it because they can't be bothered to connect everything and record live. Analogue gear and synths are amazing, like modular stuff. It's the crazy experiments and mistakes that always end up being exciting sounds."

"We are big Logic Pro fans, although it can be quite painful software to use, with its bugs, crashes and stuff. It sounds amazing and we are in love with it. We just wish Apple would put more effort in to making it more precise and stable.

"Logic X has some exciting new features, most pro producers are scared of moving on to 10 for some reason, just because it looks like GarageBand - but it is worth it. We use Logic 9 and 10 according to what we want to do. Pro Tools just to record bands and MCs, we don't find it very creative for making music."

"Well, apart from obviously my I Mac, I'd say our Tascam '90s inline mixer is amazing to have, with our patch bay. We can link anything to anything. Use outboard compressors, reverbs, it's just nice to have a proper mixer. We sometimes put whole mixes through the desk, it's obviously not a SSL but it does the job. I always find studios that don't have a proper big mixer very sad."

"The latest addition is the MPC 1000. It's so sick, we can finally have the computer off. Send MIDI to all the synths from the MPC so everything is synched and quantised. It sounds super crunchy and we can also record separate channels on our '90s Tascam four-track tape machine, which is cool. Then play the tape backwards or varispeed it, which sounds way cooler than the varispeed on Logic - it's the real thing."

"We are all obsessed with analogue gear in this studio, so there are many things we would like: Yamaha CS-80, Moog Memory, SSL AWS, GLM outboard, Manley valve compressors. These are all super expensive though and out of our reach. For now we are saving up for a Dave Smith Tempest drum machine."

"We start in many different ways, it can be a beat, melody or vocal, and sometimes it's a crazy analogue jam that goes on for an hour. And then I have to spend another three hours editing and finding the best bits.

"Every technique has its pros and cons. The most common approach for me is starting with a loop, adding all the elements I want in the tune, like for the main drop, and then removing or adding bits for the various parts, and trying to switch it up as much as possible throughout the track. So I start from the drop mainly, then build an intro for it. RZR instead creates the track bit by bit, first intro, then break down, then drop. He is also amazing at creating various groups/busses for our tracks all side-chained to each other, highs, mids, subs, percs. Everything is constantly coming in and out, and everything has its space.

"I'm very creative with production, always finding crazy samples and sounds and trying to come up with forward thinking ideas, always looking for the next sound. RZR is more rational and clinical and makes stuff just sound incredible, but still managing to transmit loads of emotion in the mix. We both push each other to do better and we are a sick team, really happy to be in a duo together."

"We are trying to get three or four EPs finished for well known labels and more underground ones too. Also producing a few up and coming artists that aren't specifically in our scene. We produce a lot of Hip Hop/Trip Hop and R&B. Can't wait for it to all be released so people understand that we aren't just about the club. In talks with some of our favourite labels at the moment, so exciting times ahead!"

Think of an idea and execute it

"Sometimes the best songs are the simplest ones, don't get distracted by a thousand plug-ins and samples. Just come up with a cool idea and get it done. Like a cool '80s sample you want to rip, or a sound track from a film. Limit yourself to a few tools that you know well, it's not about how many VSTs you have it's about using the basic ones in a clever way."

"The easiest way of jamming on the ESX24 sampler in Logic is to put a rare tune you want to sample in to the audio channel, then Ctrl click on the region and select: Split -> Strip Silence, choose the percentage of the length you want to cut. Then select all the cut regions, Ctrl click again and choose Convert To New Sampler track (by regions) -C2 to G8. With two clicks you will have a whole track inside the sampler to jam on."

"Try getting real rappers or singers on your tracks instead of always using the same old acapellas that everyone has. If you don't have any friends the can rap or sing do it yourself, even from the laptop mic or mobile phone. It's more fun and it saves you the headache of clearing samples if the tune becomes a hit."