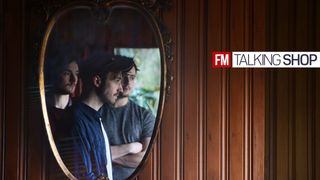 Scottish Alt-Pop outfit Stillhound have been turning heads of late with their mix of ambient synths, minimalist instrumentation and old-fashioned Pop hooks. FM caught up with Dave Lloyd from the band ahead of the release of their debut album, Bury Everything.

"I first started making music around the age of 15. I was studying at the City of Edinburgh Music School, a state-funded body which specialised in classical and jazz studies. It was a fantastic experience. My theory teacher liked his Electronica, so he introduced me to Aphex Twin and Squarepusher. At the time, I didn't really listen to any bands, so obscure Electronica and Classical music pretty much filled my entire listening repertoire.

"Soon after that, I began experimenting in the studio, innocently toying in Reason - I wrote a collection of obscure works. After a couple years of this, I joined a band with (Stillhound members) Fergus and Laurie, who introduced me to a lot of bands and other acts I'd been missing out on. Slowly but surely, working with them, my skills in the studio improved to the extent that production, mixing and mastering became my primary profession."

Tell us about your studio/set-up?

"I have been working from a gradually evolving bedroom studio for about seven years now. It's got to the point where the room is so stuffed full, I have to climb under my desk to open and close the curtains! After we mixed Bury Everything with Gareth Jones, I caught a bit of a hardware bug - his studio was full of lovely analogue gear. A few internet searches revealed that the type of gear I wanted was pretty far out of my budget, so I looked into building my own. I have been assembling/ repairing computers for years, so moving into the audio electronics world didn't seem like too big of a leap. After a couple of years filled with severe electric shocks, tears and empty pockets, I'd built three UREI 1176 clones and a Neumann U87 clone. I also work with a Focusrite One and ADAM A77X monitors, which regrettably I didn't build.

"I'm particularly fond of this studio because I built it myself - I know the whole thing inside out, and as a result I have a lot of confidence in the productions that go through it. The problem is, it all resides in my bedroom, which isn't the sexiest place to sell one's production services. Thankfully, I'm imminently moving into a commercial space, a recording studio I'm opening with Fergus and our friend Jack, named Lost Oscillation Studios."

"Laurie and I use Logic Pro X. I'm also pretty confident with Pro Tools, but for me the interface and creativity of Logic gives it the edge. Fergus works in Ableton Live, mainly for the ways in which it helps an artist get ideas down so quickly/creatively."

"That would definitely be my Dave Smith Instruments Prophet 12, I use it on almost everything I write. It's one of those 'everything synths', but most importantly it's capable of sounding like the oldest, dodgiest synth in your arsenal and also capable of creating glassy, clean, modern sounds."

"I recently purchased a Yamaha Portasound PSS-360 on eBay. They're super old, cheap-looking units, but pack a serious punch, especially when making lo-fi electronic music. Fergus has been in the vintage keyboard game for a while now, and my friends Hi and Saberhagen also use them to fantastic effect, so I decided it was my turn to invest. So far it has been great, there's not much chance of it replacing the Prophet though."

"Probably a Thermionic Culture Fat Bustard! It's a £5000 summing amp with a gorgeous analogue sound - the type of unit that makes any track just sound 'better'."

"We usually find that creating some form of percussive loop, or messing with a sample, provides the best foundations to a good jam. From that point, we all jam for a while, bouncing off each other's ideas. If it seems to be going well, we start recording things in pretty quickly, and we begin to structure the track on the computer while continuing to jam to it. It's a nice process, because it allows anyone who isn't feeling inspired to take a break, hop on the computer and work on the production/structure."

"As Stillhound, we're already hard at work on our second album, for which we've already written about ten unheard tracks! Personally, I've been working on the debut Passmore (my solo alias) single, which is coming out on local Edinburgh label Lionoil. I'm also working with Laurie as Spring Steps, along with Fergus, Jack, and a regular stream of clients who come through the studio."

If you're making electronic music, don't get too bogged down with the mix while you're still writing

"I see it time and time again, producers are half way through writing a House track, which still needs loads more musically, but already they're obsessing over making the kick sound as tight as possible. I'm a firm believer that the easiest time to write good stuff is normally within the first few hours of starting a new track. All of that time should be spent writing, until you're happy with the musical part. The mixing can be done whenever, the writing can sometimes be almost impossible to go back to."

"Every learning producer/mixer has been here, you're listening to tracks which you want your mix to sound like, you're tweaking ratios, thresholds, frequencies, and gains without even knowing for sure what you're doing or if you're even improving the sound. Your ears become fatigued and you come back to the mix another day, only to find it sounds absolutely terrible.

"If you look at the project of an expert, you'll discover that a lot of the time it's surprisingly simple. There aren't that many plugins on the tracks, and every plugin seems to be influencing the sound pretty subtly. It's all about making small changes that are actually helpful. Before you go slapping a SausageFattener or SSL compressor on everything, take a moment with each channel, listening to it critically - considering what it actually needs."

"Everyone obsesses over having the fattest mix, the loudest mix and a big sound. The way to accomplish this is to successfully identify which sounds should stand out in the mix, and which ones can take a step back. It's not enough to make a layer sound great on its own, it needs to sound great in the track. Sometimes this means removing frequencies to allow your bassline/synth/guitar to cut through and as a result, make the whole track now sounds bigger.

"The human perception of 'fatness' is based on comparison - if the listener can't hear anything that sounds tiny, they'll probably struggle to perceive anything as sounding 'fat'."