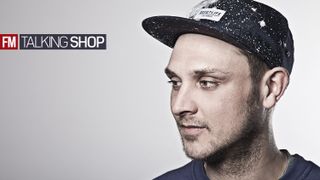 Under his now retired Al Tourettes alias, British producer Alec Storey spent much of the past decade carving out a reputation as one of the most consistently creative artists on the UK's underground circuit.

This year has seen him launch his new Second Storey project, with a run of releases for Fabric's offshoot label Houndstooth, culminating in his excellent new LP Double Divide. The album comes across as a seamless blend of Storey's various influences; combining his talent for creative sound design, the percussive drive that comes from his background as a drummer, and his ear for infectious, dancefloor-ready grooves.

With yet more projects on the horizon, including a new live show and several collaborative releases, FM caught up with Storey to find out more about his London studio space, and the techniques and ideas behind his sound.

"I started making electronic music when I was 15 but had been a drummer in bands prior to that. I started with an Atari ST, an EMU ESI Turbo 4000 sampler and a KORG M1 and was away…

"I started off making a form of Techno with Drum 'n' Bass influences and was inspired by people like Aphex Twin, Ed Rush & Optical, Cristian Vogel, Two Lone Swordsmen, and initially a lot of the Acid Techno stuff around that time (98/99), so people like Dave The Drummer, Guy the Geezer, Roland The Bastard etc. Stuff that was being played at the raves I was attending."

"I rent my studio space and have been here since I moved to London in March. I mainly use plug-ins and Midi controllers but I still use my hardware drum machines, the Elektron Machine Drum and Roland TR-606. I also use V drums and my Roland SPD-SX for live drum input. I used to have a lot more hardware gear but have slimmed my studio down to the bare essentials of what I use regularly - namely drum machines."

"Ableton for the past 11 years, Logic prior to that, Cubase on the Atari ST prior to that! I chose Ableton because it's so versatile and tailored for musicians and live improvisation as much as sequencing."

"Ableton. It does everything I want it to and I'm always finding new and interesting ways to use it. I like the fact that it's completely open-ended."

"My newest bit of gear is the Ableton Push. I was very lucky to be one of the first people to use one and it's been pretty revolutionary in terms of the way that I interact with Ableton in the creation stages."

"A gargantuan modular synth the size of Birmingham."

"It totally depends. Sometimes I will start by playing a synth or writing a beat, Or it could be a sample that inspires me. I will generally record things in real-time and then edit them after. Other times I record bassline ideas sung into my phone (generally inspiration strikes when I'm walking down the street, so must look pretty ridiculous!) and learn to play these ideas on the keyboard so I have the Midi part, so the track then grows from there."

"My debut album Double Divide was released on October 6th on Houndstooth and I'm currently working on the live show as we speak. Me and Appleblim also have our first collaborative EP under the name ALSO being released on R&S Records very soon as well, with more releases planned on both labels in the new year. In both cases I'm continuing to work on new music…"

"Sometimes you might start a track and it doesn't work out how you wanted it to, or perhaps you've just grown tired of the loop. You might be like, 'ah fuck this I'm going to start something else as this is rubbish.' In this case, render each of the channels and put them into your sample folder. When you go to start another piece you can test to see if some of those parts from the previous session might work with the new one. It might just be something as simple as a percussion part, or a whole synth line - re-pitched to suit the key of the current track - but these can sometimes be exactly what's needed in a project, and it means no time is actually wasted in the end."

"Obviously the inspiration to write music in the first place came from hearing other people's music, but I often find it counter productive to listen to too much music before starting a session. This particularly applies to music in a similar style to that which you might be attempting to write. Everyone's different of course but I think I write more original stuff when I simply have my own melodies and ideas as a starting point rather than be subconsciously coloured by someone else's."

Try to work out your optimum creative timeframe

"As we know, inspiration can strike at any time so this is no way set in stone, but I think it's good to know when you're most effective in the music making process. This doesn't apply so much to things like edits, mixdowns etc, but more to the creation stages of a track.

"I find that I'm most active late-morning and late afternoon/early evening, so most of the time I don't try and attempt to start stuff in the evenings (or after dinner). That may be partly because I've trained myself to work that way in an attempt to try not to annoy the neighbours too much... which doesn't always work!"