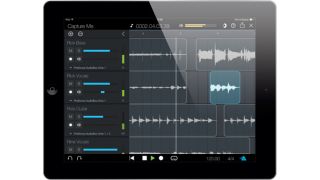 Capture is designed to help you record audio fast.

SUMMER NAMM 2014: PreSonus has come with the iPad audio party with Capture, a streamlined DAW that's capable of recording up to 32 tracks simultaneously.

Sample rates of up to 24-bit/96kHz are supported, and "basic mixing and editing features" are available. Capture projects can be transferred wirelessly to your Mac or PC, where they can be worked on further in PreSonus's Studio One desktop DAW.

Speed seems to be of the essence with Capture: create a new session and all tracks are automatically record-enabled. Just hit Record and you're away. Recordings are saved in Apple's Lossless format.

Capture for iPad is available now from the Apple App Store priced at £6.99/$9.99. PreSonus has also released Capture Duo, a 2-track version of the app that's otherwise identical.