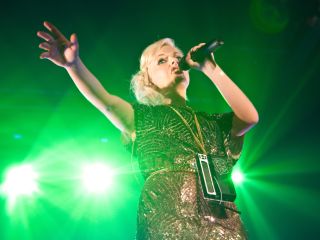 Little Boots: there's no chance of her losing that necklace.

Little Boots may be most closely associated with Yamaha's Tenori-on, but her other quirky instrument of choice is rather more lo-tech. The Stylophone was invented by Brian Jarvis back in 1967 and popularised by Rolf Harris, but thanks to a relaunch in 1997, it's enjoying something of a renaissance.

The Stylophone's glorious history (it was famously used by David Bowie and Kraftwerk) is now set to be celebrated in a documentary on VBS.TV. The trailer, which you can watch below, shows that this features not just Jarvis and Little Boots, but also MusicRadar hero Brett Domino.

Domino previously released his own Stylophone doc, which we've also posted below for your education and amusement.

The VBS.TV film will be shown on 17 August.