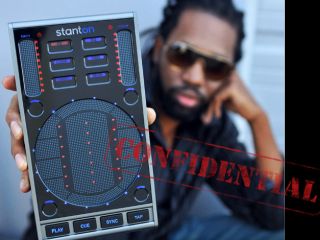 DaScratch: Confidential in the sense that everyone knows about it.

Stanton is set to unveil DaScratch, which it's calling a "revolutionary new touch-sensitive controller".

The full specs of the device will be revealed tomorrow, but a teaser page on the Stanton website indicates that this is far from your average MIDI controller. At the centre of things is the 'StanTouch' interface - this is a scratching/control area that appears to respond to touch and gestures while giving visual feedback.

There are also LEDs that promise to react in real-time to buttons and triggers, and virtual faders that glow to indicate their positions.

Based on the evidence of the photo, DaScratch seems to be pretty compact, though whether that touchpad will stand up to heavy use remains to be seen. The product will ship with the DaRouter software app that enables you to set the thing up as required.

Come back tomorrow for more on DaScratch; in the meantime check out this video of the thing in action.