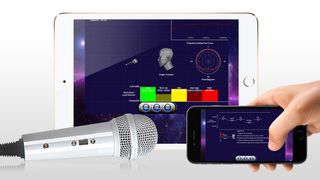 Smarter than the average microphone?

We're guessing that you might own a microphone or two, but do you own an 'intelligent microphone'? Thought not.

Sound Magic says that it's "spearheading a new technology product sector" with its iQEnhancer Mobile Intelligent and Ultimate Enhancer USB microphones, both of which can be 'controlled' from an Android or iOS app to "improve their sound". The former is aimed at the mobile recording market, and the latter at desktop producers.

Both mics feature a cardioid pickup pattern that's designed to minimise background noise and isolate the main sound source. Once you've fired up the app you're given instructions on how to create a specific sound, and you can draw frequency response curves onscreen.

You can find out more about both products on the Sound Magic website.