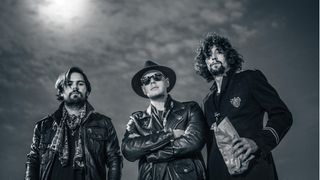 Known for their spectacular live shows (voted #1 live laser show by the ILDA), Savoy immerse the audience in a multi-sensory visual experience, combining modern-day EDM with the brute power of arena rock. The first electronic act to be sponsored by Gibson guitars, in their own words: "Savoy has always understood that the future of all music is created by the synthesis of old and new." In January, the band embarks on a 16-date tour of the US.

Do your primary influences come from rock or electronic or both?

"I would say it's a combination of both, we listen to all kinds of music, but I'd say we're a fusion of bass music and classic rock like Led Zeppelin. On the electronic side, we're really influenced by electronic artists that are focused on making albums.

"Nero are a big influence for us and Jamie xx, or artists that are focused on putting together a body of work rather than just singles."

Was there a game plan to bring Rock back into the mainstream by utilising the popularity of EDM?

"It's not really that we noticed a gap in the market and thought we could sell it, rather that we all come from an instrumentalist background. When Savoy first started, we were playing guitar, drums and bass before getting more into the electronic side.

"Our live shows have always had live drums, which has given us more of a live feel rather than being a DJ act. It's always been our prerogative to bring that live, classic arena rock feel and combine it with the sound and energy that electronic music brings today."

What facets of rock music are missing in modern electronic music?

"I think that a lot of it's in the performance aspect, especially within a live setting. If you look at all these classic rock artists, they're such performers and have such strong personas, so I think that's missing a little bit in electronic music. You could also say originality.

"There's so many people producing electronic music these days that, although there's a lot of originality out there, you do tend to get a lot of people sounding the same. I think we're probably attracting electronic music fans that are looking for something different; more of an experience."

How does the EP 1000 years build on the sound of last year's album Self Predator?

"Self Predator was a darker, more techno-based record. It was really fun for us to make and play live, but the main goal was not to think about genres and just write what we were feeling at the time.

"For the new EP, we really wanted to take advantage our instrumentalist background, so we definitely put an emphasis on melody and harmony and tried to bring more of the rock element through on this one."

"I've been playing guitar, bass and keys for a long time and picked up a copy of Reason way back. I messed around on that for a while, got Ableton when it was version 4 and have been using that as our DAW ever since.

"Because we started off as a traditional band, we were looking for a bigger sound and the idea of having any instrument at our fingertips was pretty intriguing to us. Seeing a few electronic shows back then also really inspired us to get more into that."

What's sitting at the core of your studio these days?

"Most of it's in the box, but we do have a few synths that I use a lot. A lot of the songs are started by us jamming with the synths. We have a Juno-106 that I'll sit and play, which doesn't always get used on the final version of the song, but it's nice to play a real instrument with tactile controls.

"We also use a Moog Voyager and the Novation Bass Station, which was used a lot on the EP. The sounds that come out of those things are great, and we usually end up layering them with soft synths too, so you get a nice combination of sounds."

What sounds are you using in the box?

"I use different synths for different tasks. If I need to build a layer real quick or fatten something up I'll probably use Sylenth. We use a lot of the standard ones like Native Instruments' Massive, but for chords we try to get more of a unique sound, so I've been branching out and trying a lot of other VSTs.

"One we like a lot is the D16 LuSH, but I've also been using Diva a lot and Kontakt for the more real-sounding stuff. We're also really big fans of the Korg Legacy collection; they have analogue and digital editions, and the ones we use the most are probably the EMS 20 and M1."

Do you go deep into programming and sound design?

"It depends on the song I'm writing. If it's a melodic song then I'm more focused on the writing of the melodies. I'm not great at keys - I'm more of a player as opposed to a drawer, so most of the time is spent playing to get those melodies and chords going, then later on we'll focus on getting all the sounds perfect.

"On the other hand, if I'm making a dubstep track, the whole time is spent on sound design, and I'll mostly use Thor from Reason or Serum from Massive."

Is processing done in the PC or do you use a lot of outboard gear for that?

"Most of that stuff is pretty much done in the box. I use a lot of Ableton's native effects and try to keep things simple, especially if we're collaborating with someone.

"I really like the Lexicon reverb plugin and Taurus is a really good plugin that I use a lot. Usually we'll get our songs mastered by somebody who will probably use more outboard gear, but all the mixing, EQ and compression is done in the box."

And you're happy to mix the album in Ableton?

"Yeah, Ableton is the program that we know best because we've been using it forever, A lot of times we'll bounce the whole track out to stems, re-import it into a new Ableton project and mix it from there, which makes it easier on the CPU and a lot faster too because when everything's audio you can render multiple versions really fast."

When you play guitars and drums live in the studio do you then chop them up in the box?

"Occasionally we'll jam in the studio and try to get that live feel at the beginning of the track. We'll record the guitars in the studio right into an audio interface, usually using Guitar Rig 5. We've been trying to incorporate guitars more and more, because it's a really cool part of the live show and Ben and I have a strong guitar background.

"Most of the drums are programmed, apart from hi-hats, which are sometimes played live, but most of the kicks and snares are electronic. When we play live, we'll leave the sub kick in but take out the top kick and the snare and put the snare and drums straight from the tracks into Mike's sampler."

What else are you using on stage?

"On stage, Mike uses a Roland SPD-SX sampler, which his whole kit is based on, and has a bunch of drum trigger inputs that he puts on the acoustic drums to trigger programmed electronic samples.

"I'm running Ableton and have an Akai MPD32 pad controller with some different bits from the songs chopped up on it and all sorts of macro effects and repeats. Then I run the Ableton set over to Ben who has the DJ mixer on his table, so he's got that and his guitar set up with Guitar Rig. That's pretty much the gist of it."

As an electronic rock crossover band, how do you present yourself on stage - I understand the light show is a big part of it?

"This tour is going to be the biggest and best light show we've ever had, so we're really excited by that. Fans can expect us to do more stuff live too. Ben and I have even been doing a bit of singing, and we'll be bringing out a lot of special guests on certain tour dates - but we'll probably leave that as a surprise."

The new Savoy EP '1000 Years' is out now on Monstercat. For more information, check out their Facebook, Twitter, and SoundCloud pages.