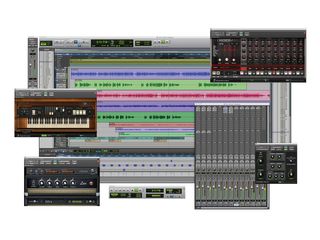 Everyone has their own opinion on which is the best software to make music with, but research has indicated that Digidesign's Pro Tools is the most-searched-for app on the internet.

It should be made clear that there's no suggestion that Pro Tools is the best-selling package, but Digital Music Doctor does believe that it's been the most searched for app on Google, Yahoo, AOL and MSN during the first quarter of 2009.

It pushed Image-Line's FL Studio into second place, though it should be noted that, in this case, the researcher also included searches for Fruity Loops (FL Studio's old name). In fact, these accounted for 43% of the total.

Similarly, Adobe Audition's position at number six can be accounted for by the fact that searches for Cool Edit were included (they made up 41% of the total). This was the forerunner to Audition, and a very popular audio editor back in the day.

Any list that ranks software is bound to be controversial - it's surprising to see MOTU's Digital Performer ahead of Propellerhead's Reason, for example - and Pro Tools' position at the top can probably be attributed to its ubiquity as a brand.

It's an application that even non-producers know the name of, so the chances are that many of the people searching for it don't actually use it but are curious to find out what it is.

The most-searched-for music-making applications on the internet