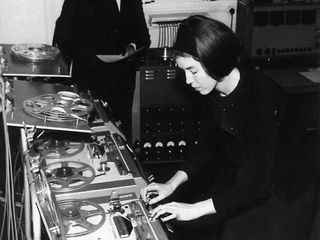 Delia Derbyshire working her magic at the BBC.

Long hailed as an electronic music pioneer, it now transpires that Delia Derbyshire, composer of the original Doctor Who theme, created at least one contemporary-sounding dance track as long ago as the 1960s.

The track is one of a collection of recordings that was discovered in Derbyshire's attic when she died in 2001. However, only now is it being made public.

Speaking to the BBC, Paul Hartnoll, erstwhile of Orbital, called the rediscovered dance track "quite amazing" and "timeless". "This could be coming out next week on Warp Records," he said.

MusicRadar has listened to the track and has to concur - it's remarkable to think that it was created some 40 years ago.

There could be more to come, too - David Butler from Manchester University's School of Arts, Histories and Cultures is the man who's revealed the recordings, and he says that he wants to make the whole archive available to anyone who wants to hear it (267 tapes were discovered in all).

What's more, he plans to commission new works, both from contemporary electronica artists and those who worked with Delia Derbyshire at the BBC Radiophonic Workshop.

You can listen to the dance track and some of the other recordings on the BBC website.