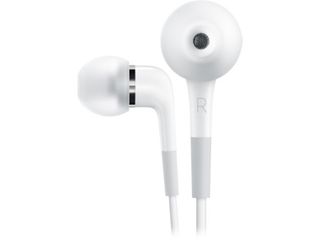 All white, but are they alright?

The headphones that ship with Apple's iPod products are notoriously 'average', but the company reckons it's raised the bar with its new set of in-ear buds.

Available now in the Apple Store (they were actually announced back in September), these feature an in-line remote and mic and are "engineered for superior acoustic accuracy, balance and clarity".

The headphones boast a woofer and a tweeter in each earpiece, while the supplied silicone tips are designed to fit snugly into your ears and cut out external noise. Frequency response is 5Hz to 21kHz.

The Apple In-Ear Headphones cost $79/£54 and, according to The Apple Store, should ship in seven to 10 business days.

The only thing to bear in mind is that the remote and mic will only work with the 4th generation iPod nano, 120GB iPod Classic and 2nd generation iPod touch models, though the headphones themselves will work with all models.