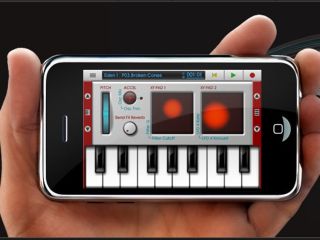 PRESS RELEASE: Blip Interactive Ltd announces a new music making application called NanoStudio for iPhone and iPod Touch which is expected to be available in the App Store from mid July. NanoStudio combines sampling, synthesis, sequencing and mastering in a single application and aims to be a complete solution for those who want to make electronic music on the move.

The app gives musicians five instruments to play with. The TRG-16 instrument has a set of 16 assignable touch pads for triggering samples and sits alongside four synths, each with an eight voice polyphony. Synth voices have two oscillators configurable in mix, ring or sync modulation modes, a resonant filter, four LFOs and three envelopes. Expressive control is possible with two XY control pads, a pitch bend wheel, a dual keyboard and accelerometer control. Each synth has a virtual patchbay, two dedicated insert effects (waveshaping and chorus/delay) and is also capable of playing samples.

NanoStudio has an advanced sequencer with features aimed at practical music making such as draw events, quantize, multi-level undo/redo and velocity/controller editing. Editing operations can be performed in real-time as the song plays.

Samples are recorded using the iPhone's built-in microphone or uploaded from a PC or Mac over WiFi. A resampling function increases the potential for adding far more depth to compositions than five instruments would otherwise allow. There is a built-in sample editor with multiple levels of undo/redo.

A seven input stereo mixer brings everything together and adds two send effects (reverb and chorus/delay). NanoStudio will render the final mix to a wav file and transfer it to a PC or Mac via WiFi.

Matt Borstel, NanoStudio's developer said, "I could see a gap in the market for an iPhone DAW but being averse to fiddly little screens I was cautious about cramming so much functionality into a single app. After some experimentation I put these fears to rest, and the finished app strikes a nice balance between being able to quickly sketch down musical ideas whilst offering adventurous musicians loads of good stuff to get their hands dirty."

Blip Interactive will be giving away a free full version of NanoStudio for users to try out on a PC or Mac as soon as the iPhone version has passed submission to the App Store.