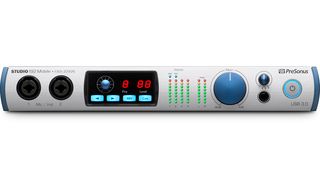 NAMM 2016: While it would be fair to say that USB 3.0 hasn't exactly revolutionised the audio interface market, PreSonus's 192 Studio, released late last year, serves as an impressive testament to the speed of the currently dominant prosumer peripheral connection standard. Indeed, the only problem with the 192 Studio is that it's a full-width 1U rack unit, wholly unsuitable for life on the road. What the world needs, clearly, is a slimmed-down version of it.

Enter the all-new 192 Mobile, said to deliver "the same high-end audio, low-latency monitoring, tight software integration, and studio command center functionality" as its big bro, but in a much smaller form factor.

The PreSonus 192 Mobile is a USB 3.0 audio interface with up 22 inputs and 26 outputs running and 48kHz, or 14 ins and 8 outs at 192kHz. Of course, those figures represent a mixture of analogue and digital ports, so in terms of analogue connections, the 192 Mobile offers four inputs - the two on the front incorporating Class A XMAX mic preamps - and seven outputs, one of them a stereo headphone jack. Digital I/O comes in the form of stereo S/PDIF, ADAT Optical (up to 16 channels in each direction, via four physical ports) and word clock.

The "studio command center" bit comes from the array of monitoring control features also onboard. You get Mono and Dim controls for the main mix output, a dedicated headphone DAC with its own volume control and cue source switching, talkback control, and the ability to use the six balanced outputs for monitor mixing or speaker switching.

Of course, integration with PreSonus's Studio One DAW (the Artist edition of which is included) is a given, including zero-latency monitor mixing and full preamp control via the DAW itself or the Studio One Remote app for iPad. Users of other DAWs can get similarly hands-on using the UC Surface touch-ready control software for Mac, PC and iPad, and even control the preamps via MIDI.

The Studio 192 Mobile also features the same Fat Channel parametric EQ and dynamics plugin found in Studio One on every analogue input and the first eight ADAT inputs, for general production usage or near-zero-latency (2ms) monitoring.

Expected to drop at some point in March, the Studio 192 Mobile will be priced $599.95. Find out more at the PreSonus website.