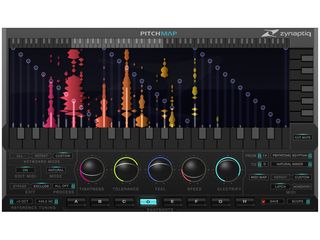 Pitchmap is said to be capable of 'de-mixing' an incoming signal into individual elements so that they can be processed separately. The pitch correction features are pretty self-explanatory; pitch mapping refers to the way in which you can change harmonies and melodies.

You can find out more in the press release below, and there's a quick example of Pitchmap in action in the video above. It's scheduled for release on 19 January priced at €269, though the price will rise to €399 on 1 April. A demo will be available, too.

We're proud to announce the imminent release of Pitchmap, the world's first and only audio plug-in capable of polyphonic pitch-correction and pitch-mapping in real-time.

Pitchmap allows real-time correction of pitch inaccuracies within mixed signals, as well as completely altering the tonality, chords, harmonies or melodies of a musical signal on- the-fly, a process we call Pitch Mapping.

Pitchmap does this using our proprietary, artificial intelligence based MAP technology (Mixed-Signal Audio Processing) to de-mix an incoming signal - like, for example, a full mix - into individual elements, and then allows the user to arbitrarily or automatically correct and modify their pitches. Additionally, Pitchmap provides means to deliberately induce processing "errors" to make results sound synthetic in a very futuristic and unique way.

"Our DSP Developer Stephan M. Bernsee has come up with what we believe to be a real game-changer." Zynaptiq CEO Denis H. Goekdag said. "Pitchmap lets you reach into a recording and change the pitch-related aspects of the composition on-the-fly. You can change an entire song from minor to major with just a couple of clicks, simultaneously correcting any tuning issues and changing the key. While there are other pitch processing solutions available, Pitchmap combines polyphonic capability, a real-time workflow and an exceptional processing quality based on techniques that model the human auditory system, thus opening up a whole new level of creativity."

Zynaptiq GmbH, based in Hannover, Germany, creates audio software based on artificial intelligence technology, and was founded in 2011 by Stephan M. Bernsee and Denis H. Goekdag, known for their involvement with Prosoniq, Hartmann Music, Surround SFX and the DSP Dimension, amongst others.

Pitchmap provides all of the following functionality in real-time:

Pitchmap as well as a free trial will be available from our website January 19th, 2012.

Pitchmap will initially be released as Mac AU (AudioUnits) Plug-In, with VST and AAX support for both Mac and Windows platforms planned for later in 2012.

Pitchmap is priced at USD/EUR 399,- and a limited-time introductory price of USD/EUR 269,- is available until April 1st, 2012 (prices inclusive of VAT or sales tax if applicable).