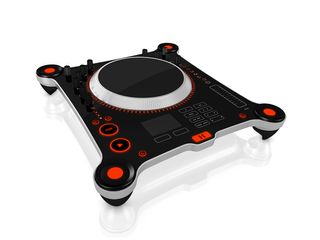 Otus is set to be a DJ MIDI controller like no other.

While some manufacturers have chosen to model their DJ MIDI controllers on traditional DJing hardware, Finnish company EKS is taking a rather different approach. Its new Otus hardware looks like no other device on the market and, excitingly, is touch-sensitive.

The Otus sports an XY controller and a range of virtual knobs. These can be operated simply by moving your fingers on them. The hardware's four outer wheels, meanwhile, can be set to control any of your software's functions.

You'll notice that, unlike on some controllers, there's only one deck, but you switch to controlling your software's second deck simply by pressing a button. If your software has four decks, it's suggested that you run two Otus's in your setup.

Scheduled to ship in May 2008, the Otus is expected to retail for £450 in the UK. If your interest has been piqued and you want to find out more, head on over to the EKS website.