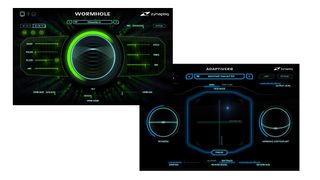 MUSIKMESSE 2016: Zynaptiq has confirmed that it'll be showing two new plugins in Frankfurt, and also that it'll be serving an "excellent single malt". We're not sure which of these three announcements we're most excited about.

Probably best to focus on the plugins here, starting with Adaptiverb, a reflectionless reverb plugin. This eschews the traditional method of room modelling using reflections, instead focusing on "creating depth, harmonic richness, and butter-smooth harmonic tails without obscuring the source or perceptually moving it back".

A variety of technologies have been used in Adaptiverb's creation, including ray tracing reverberation, adaptive similarity filtering and - most excitingly - a new AI technique that's said to be similar to that used in self-driving cars so that they don't crash into things. Now that's something we weren't expecting to hear.

Adaptiverb promises to create lush spaces, smooth drones and far-out textures, and is expected to ship in the second quarter of 2016.

Zynaptiq's other newbie is Wormhole, which is designed to create other-worldly sounds. If features a spectral warping section, a reverb and a processor that integrates pitch and frequency shifting into a single process. It specialises in alien voices, surreal ambiences, spaceship drones and off-the-wall instruments - things that sound not of this world, basically.

As with Adaptiverb, Wormhole will be shipping within the next few months. Both plugins will be available in VST/AU/AAX/RTAS formats for PC and Mac, though we don't yet know how much they'll cost.

Preliminary specs are below and you can find out more on the Zynaptiq website.