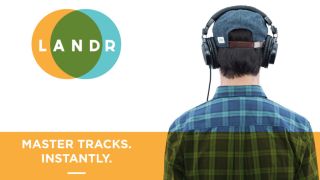 When we brought you news of the new LANDR 'instant online mastering' service last month, the response was huge. Many of you were quick to try it, with some coming away disappointed, and others pleasantly surprised at how good a job it does of polishing a mix.

More than anything, though, the announcement threw up a lot of questions, with many of us wanting to know more about how LANDR works, how good its results can be (and might be in the future) and whether this really is the start of a revolution in the way that bedroom producers master their music.

Answers were what we were looking for, then, and we got them fromThomas Sontag, Head of Communications and Artist Relations at LANDR's development company MixGenius.

Could you briefly explain, in as simple terms as possible, how LANDR works?

"While the execution is very different, the principles are essentially the same as with traditional mastering: LANDR 'listens' to a track, analyses it, and decides on a delicate cocktail of signal processing to make the song come to life and sound its best. The engine responds to each track in a unique way - it's not template or preset based. The system reacts dynamically to the content."

Are you confident that LANDR is good enough to master tracks to 'release quality'?

"In addition to working for MixGenius/LANDR, I run two record labels (Turbo Recordings and Multi Culti) and this summer we're doing our first commercial release mastered by LANDR (and it won't be our last). Don't be surprised if you see a LANDR-mastered release in the charts sometime soon.

"We've done extensive A/B testing comparing LANDR masters to professional ones, and the results are very competitive, in some cases even beating out studio work by top-shelf mastering houses. We've still got work to do before we can match the quality and nuance of the best engineers every time, but with every engine update we get a bit closer.

"We're also looking into offering specially tuned outputs for different listening environments (club, hi-fi, and online streaming), something that could potentially put us ahead of the curve, breaking free of the idea of a 'one-size-fits-all' digital master.

"The fact is, the world spends so much time listening to music on incredibly lo-fi equipment like iPhone speakers - it's become something engineers reference when mastering pop records. The problem is that there's practically no way to make mixes sound optimal on speakers like that without compromising how they'll sound on a great club system, yet we can't deny how important it is for music to sound as good as possible on these formats.

"So, while the complexity of multiple masters isn't for everyone, it's something we think will be important to offer as an option - and at no extra charge. We're also looking to add formats (MFIT, 16/48 for video, etc) to facilitate the process for users looking to release their audio in different markets."

Are there particular types of music that LANDR works better on, or are you confident that it delivers consistent results across all genres?

"The results right now are reasonably consistent, and we are confident that the results will get more and more successful across all types of music with each engine release. Our genre detection system is a key part of the learning mechanism that helps LANDR get better with each song that's mastered through it. We're really excited about the potential for this and the level of refinement it will bring to the table."

You say on your website that LANDR is "smart and getting smarter". Could you explain how throwing more music at it will improve the service, and in which ways?

"Our engine uses the same approach to big data and feature analysis that fuels things like Pandora or Shazam, matching to a very big data set, in our case to determine mastering parameters.

"The algorithms were built by analysing thousands of tracks, and by doing research and analysis of engineers' 'self-perceived' processes vs the actual spectral and frequency changes that happened as a result of those processes. In that sense there has been a lot of reverse engineering involved in LANDR's 'education.'

"Now that the site is live, the system is self-learning from the data we gather by users and improvements are rolled out regularly, on a bi-weekly cycle. User behaviour teaches LANDR a lot, and with some of the new features we'll be adding in the near future, we'll get even more valuable feedback that we can use to refine things further."

What would you say to people who come away disappointed that LANDR doesn't turn their bad mix into a professional-sounding track?

"LANDR will generally improve things considerably and go a long way toward fixing problems - we have users who are very excited about the way it improves even poorly-recorded live shows. However, no mastering engineer can perfectly fix really severe problems in a mix. At best they can tell an artist when they feel there is something very wrong that they can't correct, but from experience I can say that doesn't happen as often as it should.

"Our system does offer certain levels of feedback that a mastering engineer would. For example, we just added a notification to users when they haven't left enough headroom for LANDR to do its best work. We also refuse certain bit rates and file types and send feedback to the user so they will know why we've made that decision and how to output better for mastering.

"Critically, we've made it free for MP3s, so musicians can get an instant snapshot of what the mastering process can do for their mix without having to pay anything. Without the pressure of committing to a final version, they can then go back and resolve the mix issues or tweak the arrangement until they hone a pre-master that will come out sounding fantastic."

Would it be possible to take the technology used in LANDR and put it in a plugin or standalone application that people could buy? If so, why use a subscription model rather than allow people to purchase the product for a one-off fee?

"This is an easy one. Delivering the product online gives us data that helps us improve the engine. The economics of a subscription program and recurring revenue allow us to offer the service at a much lower price point than we would as a per-track service. We want people to have access to the service at the lowest possible cost. There's also no need to download or install updates, which is nice - especially when we are on a two-week upgrade cycle."

Finally, do you believe that automated services such as LANDR will eventually become the norm for most musicians, and that only a select few will bother to employ human engineers?

"There are millions of artists making music now as amateurs, without label support or touring income. They are our primary market and generally they aren't hiring mastering engineers, so I don't think it's an 'either or' scenario in most cases. At LANDR's price point, the two need not be mutually exclusive. Most professional artists that I've talked to have been keen to use LANDR in ways they don't use traditional mastering, running their DJ sets, live loops, samples and new bounces through it.

"As for whether we will end up encroaching on the pro market... I think it'll happen a little, mostly because of how tight the margins are for indie labels. It's not easy to sell records and it's also not uncommon for mastering engineers to earn more than artists off of records. Sad but true!

"I love anarchic old machines with tubes and valves as much as the next dweeb. I still buy vinyl, I still appreciate the sound of a muscle car's gas-guzzling engine, and the beautiful process of developing large-format film in a darkroom, but being a luddite comes at a high cost (on so many levels) and fewer and fewer of us can afford these luxuries in our lives. Being a devout purist, harping about the 'golden days' of such-and-such, it's cool... kind of... but I'm always suspicious of that kind of reverence for gear, and generally don't see those 'types' producing the most interesting work. Historically, that thing of clinging to the old is followed by an era where the new becomes virtually indistinguishable from the old, or supersedes it entirely, enabling new modes of creative expression."

"In the end, people need to trust their ears and instincts and decide what works for them. At the risk of getting a bit too philosophical (again): there's no right or wrong way to make music. Don't trust anyone that tells you otherwise."