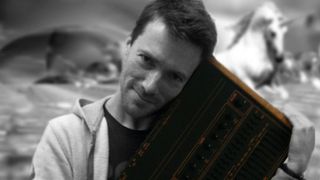 Swedish software developers XLN Audio first found success with their superb virtual drum kit Addictive Drums, which was followed by the equally impressive Addictive Keys classic keyboards emulator. Recently they've branched out into effects with DS-10 Drum Shaper and drum triggering with Addictive Trigger. We pinned co-founder Lars Erlandsson down to get the skinny on how it all came together.

"I've always been interested in technical stuff. From Lego as a kid onwards to soldering DIY electronic kits, and then the home computer revolution when I was about 12. Synths were always very intriguing - my first synth was a DIY PAiA kit. As the years went by, I moved on to just writing and producing, and in the early 2000s, I was working full-time as a writer/producer in Stockholm.

"After teaming up with current XLN CEO and co-founder Niklas Möller, the idea for Addictive Drums popped into existence. We teamed up with some excellent programmers to make it a reality. I did a lot of programming on the tools we used to edit the thousands of samples. When we developed Addictive Keys, I got a digital piano in the XLN office, and spent a lot of time playing just for fun!"

Addictive Trigger is your new drum replacement plugin. Which part of it was hardest to get working right?

"As with many things, it's the last 10% that takes 50% of the effort! The 'Audio Fingerprint' technology worked pretty well from the start, as did the transient/peak detection - at least on a basic level. We started it out as a lab project, and it was pretty clear that we had something really cool there. Then a lot of time was spent refining and improving, testing 'impossible' cases etc. We always spend a lot of time on workflow and usability. Things move around a lot in the interface from the early labs 'til the final product."

How is the process different between sampling pianos and drums?

"In a regular piano recording (in a song context), the mics are set up so that the piano sounds good for that particular song - for the range of keys used and so on. So maybe the top key range sounds really weird, but if they're not used in the song, it doesn't really matter. With sampling, on the other hand, you need every single key to sound good and consistent. So mic placement is really important, especially since we also sample a lot of different mic perspectives. Drums are easier in this aspect - each drum needs to sound good but is its own little entity, with its own sound and placement.

"For both types I can say this much: it's a lot of work. The sessions are long, and pretty soon you hear long ride cymbal decays in your dreams!"

You recently released the DS-10 Drum Shaper, too. Were you able to apply what you learnt in producing Addictive Drums (in sampling/mixing kits and in programming the software) while making it?

"Addictive Drums 2 introduced a transient shaper in the effects chain, and we realised what a powerful tool that is. We've always talked about releasing something from AD as its own 'thing', and this seemed like a great candidate. Once we started talking about transient shaping, we came up with a whole bunch of new cool ideas, which made DS-10 grow into its own thing. We kept the original algorithm from AD2 and added two more, plus a Mojo section that does sensible things depending on input material. Having worked so much with drums was definitely helpful, and we really wanted to make sure it works great on drums rather than taking a more generic approach. I really like how it turned out!"