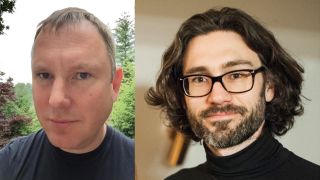 Two of TSC's founder members fill us in on the company's past, present and future.

Tell us about your background in music and in software development. Could you recap the slightly complicated story of Tracktion in your own words?

Jules Storer: "In the late 90s, I was learning my craft as a programmer in various video/audio companies and was interested in trying to do some music recording on my computer. People who have long memories will recall that DAWs and PC hardware were pretty feeble back then, so building my own didn't seem too unrealistic!

"I released Tracktion 1.0 somewhere around 2001, and Mackie took it over from me around 2003. By 2005, I was no longer involved in the development of it. Woody [James Woodburn] had been the product manager for Tracktion while he worked at Mackie, and in 2011, he got in touch with me to suggest joining forces to take it back and resurrect it."

Tracktion has seen plenty of updates since then. Do you feel you've been catching up with today's DAWs, or are you free to push the envelope?

JS "At first, it did feel like we had a few years of lost ground to recover, but after two releases, we're really pleased with the state of the codebase and its featureset. We're already exploring ways in which our next features can do things that nobody else has done yet."

You've just made Tracktion 4 available for free. Why?

James Woodburn: "The bottom line is: to grow our user base. Our development pace is much faster than most established brands, so we have multiple generations of a product that function well on current platforms. This allowed us to make T4 free and, in turn, gain more users.

JS: "We develop plugins, too. As well as MasterMix, we'll soon be adding some exciting instruments and effects to our range - so we'll be growing our user base to include users of other DAWs, too."

You bring your products to market at comparatively low prices. What inspires your decision to price them around $60, when similar spec products often sell for more?

JW: "It was partly historical, but also due to the competitive landscape for DAWs - Apple really squeezed the price boundary for a DAW, but that's OK! Fortunately, we brought Tracktion back into this modern landscape knowing from the beginning that it would need to be priced aggressively, and we're building our company around that fact. We're proud to be 100% customer funded, and we have relatively low overheads, which allows us to reinvest heavily in development - not only of Tracktion but also virtual instruments, effects, hardware and our online Marketplace."

The JUCE library is something that developers often mention. What's the advantage of using it, and what are your plans for it?

JS: "Yes, JUCE is a big player in the audio dev community these days, and JUCE is what I focus on as my main day-job. Most small indie plugin developers choose it because it cuts out a lot of the horrible stuff that you need to deal with when building for multiple platforms and plugin SDKs. At the moment, we're frantically working on new tutorial content, so the plan is that juce.com will be a no-brainer in terms of a place for beginners to learn the basics. We've also put a lot of effort into the Tracktion Marketplace as an easy way for small plugin devs to sell their products."