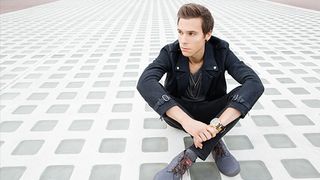 Matthew hadn't expected his new matrix pad controller to be this big when he ordered it.

Having collaborated with a large proportion of big room nobility - including Zedd, Tiësto, Audien, Showtek and Hardwell - Matthew Koma is fast becoming known as the 'voice of EDM'.

However. the singer, songwriter and producer's pre-eminence in electronic music belies his more traditional roots, which are more evident in his - also hugely popular - solo material. With tens of millions of YouTube plays under his belt, we caught up with Matthew to discover his top 10 tips for writing hit songs and conquering the world of pop.

"When I was 13 or 14 I was in a bunch of bands with some other musicians from the area, and my brother on drums. We'd play around New York locally, building a following, and when I was 16 or so we played a contest for a radio station. They'd have headliners come through the city, and local bands would open for them. It was great exposure that you couldn't otherwise get without already having the profile to tour."

"So, there was one night that we were opening up for Maroon 5. There was a scout there from EMI Music Publishing, who gave my demo to the president of EMI. One thing led to another, and we found ourselves up in his office. He seemed interested in the songs I was writing, and this seemed to be an opportunity to grow - not on the artist front, but on the writer-producer front.

"So, after a year of getting to know each other and writing songs and continuing touring with the band, he offered me a deal where I was able to count on him for support for touring. It was a great deal because it allowed me to go to the 'college of rock 'n' roll', so to speak. I was able to keep my band on the road and have some support, but I was still in control and I was able to figure out for myself what my path was going to be."

"After one of our bands lost our first record deal I was like 'I want to keep the band on the road at least - we have to tour, we have to build a following', because building a fan base is how you get to the next level. Without having a record deal you needed a booking agent, So I grabbed my best friend from high school and we started an 'agency'. We used fake names, bought a domain, and spent time in this office in NYC that we shared with another booking agent.

"We kind of helped him book some of his artists, and he allowed us to use some of his office space so we had internet access and phones that people could call back and whatnot. So we ran this totally bogus booking agency that ended up keeping us on the road for two years while we began to build relationships and a following.

"There were times when there would be a quiet show and a promoter wouldn't pay us, and we'd have to go outside in the van and call them up pretending to be the booking agent and argue with them, then walk back into the building as the artist to get paid!"

"Everything is some sort of inspiration, whether it's a good experience or a bad experience. Travel, sitting at home - whatever it is it's an ever-changing and evolving process for me. I'm not the sort of person who necessarily has a set way to do it. It's always constantly brewing... there's always a song or multiple songs in the works.

"Someone will send me a track, so I'll be writing a topline on that. Then I'll be writing something on acoustic guitar and producing it myself, or developing a hook idea. It's always a different process but I think, for me, as long as long as my surroundings are constantly changing, I'm inspired to write. I like to be portable and be mobile - I write a lot of lyrics in the car even. Sometimes words will come a little easier in that environment versus sitting down in a studio and trying to consciously write a song."

4. Get your ideas noted down as soon as possible

"I always have a studio setup with me, so as soon as I get to a hotel I can get to work. A lot of the stuff I've recorded over the past couple of years - be it my own records or collaborations - has been recorded in hotel rooms or in the back of vans or busses, just because it's easy to be that mobile these days."

"For quick ideas I just resort to the good old iPhone voice memo... I'm the crazy person on the plane mumbling lyrics into a phone so I don't forget them! Just use whatever means you have around you to make sure you don't forget the idea. Usually, I try to get to somewhere I can record the idea as soon as possible, even if it's just like programming a piano melody or something, and writing the lyric down so I know how it fits."

"Sometimes you'll think you're recording a demo, and it becomes the take you end up using. For the most part I bring a little preamp, compressor and mic with me on the road. If I'm in a hotel room and I feel like it's too live I'll throw something up on the wall to get a deader recording. Other times I'll be grabbing an SM7 in the back of a van and doing the best I can because I have an idea, and for whatever reason that recording has a vibe and you don't want to re-cut it.

"I'm a huge fan of the sonic side of recording, and it's great if that can be married with the creative side in the same song, but sometimes you capture something that's real in a moment, and then that ends up being it regardless of sound quality."

"I don't have a specific set of rules - I just try to speak about something that comes from a sincere place. That doesn't necessarily mean that it has to be something that I experienced, but something that I'm really putting myself into. I'll try to find a unique angle to come at it from. That may take imagination, but sometimes it just takes being honest about whatever it is. That's something I always challenge myself to do: bring something to the table that makes it sound like mine rather than anybody else's song."

7. Develop your skills by making different types of music

"I really love a lot of different types of music - some days I wake up and I'm like 'Damn, I wish I had long hair and I could be Ryan Adams for the rest of my life'. Other days I'm like 'Holy crap, I'm obsessed with LCD Soundsystem'. I really love working on stuff that comes from all different walks, and I think if you can incorporate that all in the scope of a career like Elvis Costello has... that's success for me.

"Success isn't necessarily measured by millions of records sold. Good work doesn't have to live under the same genre umbrella for it to be consistent. I think artists take a long time - and deserve a long time - to grow and show those different sides. I just really enjoy that exploration process. I'm in a place now where I'm just finishing my record and it's definitely a statement of where I am right now. It might not be where I'm going to be in six years, but it's where I am right now."

"Like anything you have to recognise what it is you're passionate about. If you like making beats, then find someone who loves writing words if you think that's something that you're not interested in. But if it is something you're interested in, there are no real rules - you just dive in. The worst case scenario is your song sucks - then you just write another one!

"If beatmaking is your thing and you want to try different melodies on top of, write three of 'em. When I first started writing electronic music the first song that was sent to me was from Sebastian Ingrosso and Alesso. I sent them a top line, and they didn't like it. My response was like 'Fuck... I'll write another one! I'm not gonna pass on the opportunity, I'll write another damn song and get them to like it!' It ended up being a great song [Calling (Lose My Mind)] and I'm proud of it."

9. Try to connect emotionally with your listeners

"One of my favourite songwriters of all time is Elvis Costello, because sometimes you'll have to grab a dictionary and pick a song apart to work out what he's talking about. You can add your own meaning to it. But I also love Bruce Springsteen, who is very direct with his storytelling.

"Sometimes it's a simple or direct word that makes the difference, and makes it digestible. Sometimes you don't want to overcomplicate that. If you're trying to say something that's already been said, try to find a new way to say it that will have an emotional connection. People like music because it does something to them emotionally. Whether it's pop radio or underground dance music or a hardcore band, it makes you feel something. So as long as that lyric is making people feel, or think or do something, then it's mission accomplished."

"When I'm struggling with a song, I just let it sit. They need to live and breathe. They need to be taken on walks and taken on drives. Sometimes it'll take 15 minutes, sometimes a week, sometimes longer. You might just have a lyric that works, but you haven't found the right song for it to live in. It's an ongoing way of life."

"I don't like deadlines. I don't like working on stuff that is necessarily for a purpose. I just like writing songs, so when they come they come, and I try and find homes for them after. On a certain level songwriting is like standing out in a field with a rod and hoping lightning strikes... it's not going into the kitchen and making a recipe. You might have a lyric that you've had for three years that you've always wanted to find the perfect place for, and you just have to be patient."

You can find out more about Matthew Koma and check out his music and videos at www.matthewkoma.com.