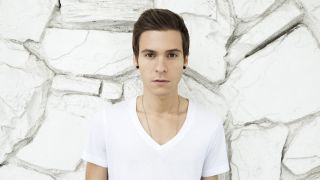 Songwriter, producer and DJ Matthew Koma is the man they all want to work with, following a phenomenally successful stream of co-writes that have resulted in eight No. 1s on Beatport and four Billboard Top 10s, including the No. 1 single Clarity, co-written with Electro-House star Zedd.

Signed to RCA for the release of his debut single So F**kin Romantic, we peek behind the curtain to find out what makes Koma tick.

What were your musical influences as a youngster growing up in New York?

I was really lucky to grow up in a place with so much to offer, with so many niches and scenes to tap into. My brother took me to my first local hardcore shows at random VFW Halls when I was five or six, and that was my first real exposure to a culture that revolved around music but cut through to lifestyle.

Between my brother and a family of musicians/writers who constantly blasted Bruce Springsteen, Elvis Costello and Tom Petty, I was a mutt. The first time I was exposed to dance music was through my friend Noah who played me a mixtape of stuff he'd been listening to at the time. On my first listen, DJ Shadow stood out, and that was a whole other culture to dive into, especially with the NY club scene being so accessible.

When did you feel you had the ability to choose songwriting as a career path?

It was never really a conscious decision. I wanted to be Dave Pirner and Kurt Cobain when I was seven and that never went away. I don't even know if it's fair to call it a hobby because it was something I did every day out of necessity.

I remember having my first recording set up with a four track and trying to bounce down between tracking live drums, bass and guitars. It was an obsession. I sucked at sports, still do.

So F**kin' Romantic has a very electroacoustic sound, is dance pop an area you're looking to stay in?

I don't necessarily think I'm looking to "stay" or "not stay" in any specific genre. I've been really fortunate to find a voice within electronic music. It's one aspect of what I do and enjoy immensely.

When I write songs or make records, I'm much more concerned about the quality of the message and the honesty of it versus whether it fits into a particular box. You never know where a slight left or right turn can take you, but as long as it's me making that decision I'll feel good about it.

10 weird production tricks that will improve your mixes

John Mitchell: 5 things every band needs to know before they go in the studio

What's the meaning behind the track itself?

It's just a fun song about being the most exaggerated version of yourself that we never really are. I tend to write pretty serious songs and this was one where I just got to be a bit of a caricature of myself with a completely ridiculous and unrealistic sense of self-importance and confidence.

I had the idea for 'I'm So F**kin Romantic' and it sounded ridiculous. I wanted it to feel like Ferris Bueller in the parade on the float.

Was the track influenced by the collaborations you've done with other dance artists?

They've had a huge hand in me finding my way to where I am now, both as an artist and a writer. I got to work with some of the best artists in electronic music, and those collaborations were an amazing vehicle that really helped me find my comfort zone and reach people with my songs.

My favourite thing in the world is writing songs and connecting with people through lyrics and melody, it's all about that relationship between the artist and the listener.

Which other artists would most like to collaborate or co-write with?

The list is so long! My favourite band right now is from California, called Dawes. I think their frontman Taylor Goldsmith is one of the best writers of the past 20 years, and I'd kill to work on something with him.

I'm also a huge fan of First Aid Kit, two beautiful sisters from Sweden with incredible voices. I could go on and on, but I've been working with new artists, Jai Wolf and Midoca, who I think are really talented and coming from a unique perspective.

I actually hate being in studios for the most part, so tend to keep my setup feeling as non-studio as possible. I have a giant table with a bunch of weird Buddy Holly and The Room bobble heads, and a laptop.

I sort of have a weird obsession with snacks, so everywhere I travel I bring home candy and dry snacks for the studio. A few posters - Squeeze, Costello, photos of family and friends, sushi pillows, guitars, giant boxes of goldfish, lots of leftover coffee cups, and chewing gum.

What gear was used to write and record So F**kin' Romantic?

It was all done at Dry Snack Sound with my buddy Dan Book. Some of the track was made in Logic but all of the live elements were done in Pro Tools. I'm a Pro Tools guy and I think I speak Melodyne better than English.

I use a lot of the Kontakt libraries - they're great and always a solid start point. I think I'm the only person on earth who actually uses Pro Tools for MIDI, also but it's the language I learned so I'm really used to it.

Do you mix your own records as well as produce them?

In the studio I mix in the box and, for the most part, always have some sort of hand in the production before sending stuff off to the mixers.

I always have an idea of the world I want the mix to live in, but having someone come in and squeeze that extra 20% out of it is always really helpful. It makes me scratch my head at how they get the low-end and vocals sounding so much better than mine!

Is writing guitar-oriented songs a thing of the past for you?

Not at all. I love picking up a guitar and writing a song, but I've spent so much time writing that way that it's been good to shake things up.

Every instrument triggers a different way of going about the process, so it's actually been nice to get away from it for a little, but it's still really inspiring to sit down with an acoustic guitar and just let something flow.

Do you have a collection of favourite guitars?

I have my go-to gear when it comes to guitars. My favourite is actually this small body Martin that my buddy Ron Aniello has, which I steal from him whenever I record acoustics. It's one of those "pick it up and the song writes itself" guitars. It's between that and a Gibson J-185 that I've had forever.

For electrics, I always go to my '51 Nocaster or my Gibson ES-135 - the Gibson is actually a one-of-a-kind that I found in a Gibson Trailer at Summerfest in Milwaukee a few years back. The finish is matte white with a blue sparkle, and it was the only one made. I fell in love, snagged it, and it's been special to me ever since.

My dad's Trini Lopez ES-335 also records incredibly well, and I use that whenever I'm working at his place in NY. My dad's friend Mike Taylor built me a P-Bass when I was first starting and that's made it onto every recording I've ever done.

When can we expect to see a debut album and what direction is it likely to take?

I'm really excited for people to hear this record because I think it's been a long timing coming to release a body of work as opposed to a single or singles with other artists and producers.

I think people will be able to see the similarities, but it also feels like a departure in that it has its own identity and cohesion.

What's your attitude towards the DJ culture in general and the role you play in it?

It's a culture that I am so grateful to be a part of, and it's played a major role in allowing me to do what I love. It's been fun to jump around different roles within the scene.

It's also been cool to see people who come from a dance-oriented background respond to my acoustic videos and shows, because I feel like I'm getting the chance to bridge the gap. That's why I think festivals are some of the most powerful places to be, you're all in this state of openness and acceptance and music is the driver.

Will your DJ setup have any crossover into live concert gigs?

The live show is still evolving. My ultimate vision of where I want it to be is an absolute hybrid where electronic and live elements interact.

I love playing with my bandmates as much as I love playing DJ sets, and as time goes on I've been able to find ways to make both aspects work within the same show.

You can keep up to date with the latest news on Matthew Koma's siteandfollow him on Facebook, Twitter, or Instagram. For his latest tracks head over to Soundcloud and check his videos out on YouTube.